Connected in the clouds

ViaSat's satellite internet technology offers faster speeds for all passengers on an aircraft. It's a big upgrade from earlier, slower air-to-ground technologies. 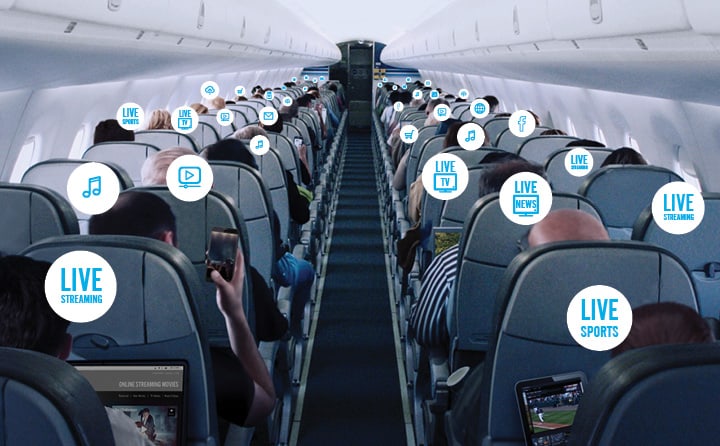 Be honest – how often do you check your smartphone? There was a time, not too long ago, when airline passengers were just used to being offline when they were in the air. Early versions of Wi-Fi available on commercial aircraft were notoriously slow, not to mention expensive. And since the signal typically came from cell towers on the ground, the connection would often fade in and out or disappear entirely. Plus, there wasn’t much capacity, so if more than a few people were using it, it bogged down for everyone.

A better way to deliver internet service to a plane is through satellite. Viasat has been at the forefront of this newer technology, with hundreds of planes now using our in-flight Wi-Fi. Operators such as JetBlue, United, Virgin America, Qantas and EL AL Israel Airlines are all using our system, with many more airlines, including American Airlines, Finnair, Icelandair and SAS adding the Viasat service to their aircraft.

Our residential internet customers know that, to get satellite internet service at their home, an antenna dish must be mounted on the home and pointed in a particular part of the southern sky. So how do you get that kind of signal to an aircraft that’s flying in all different directions? One of the key innovations to getting satellite internet to work at 500 mph on an aircraft is to make an antenna that can move…quickly. And you’ve got to design this steerable antenna to fit on the fuselage of an airplane. In addition to creating that rotating antenna that can track the satellite (or sometimes multiple satellites) without missing a beat, we had to develop the technology that would enable the plane to stay connected even as it moved into and out of the various “spot beams” that our satellites use.

In addition to the antenna, each plane must be equipped with a modem connected to that antenna, plus a power source, cabling and the Wi-Fi router to deal out the signal to everyone on the plane. Now, that guy in 27F can stream Netflix, text his kids, read his email and catch up on the news — all at 35,000 feet.

But despite all the technology, the reality is that once people have something like this at their disposal, they expect it to work pretty well. Prior to Viasat jumping into the market in 2013, most people who used Wi-Fi in the air might have said it was cool, but they likely said it wasn’t very good and, as our competitors have stated time-and-time again – they made the service pricey to keep the take-rates low. So, when Viasat set out to enter this market, we wanted to make it fast and reliable enough to stream video as well as affordable.

In addition to solving some of the technical issues mentioned above, we started out using our Ka-band satellites. Other in-flight Wi-Fi services use either ground-based cell towers — known as Air-To-Ground (ATG) — which simply do not have the capacity to serve an entire plane full of people, let alone hundreds of planes with hundreds of devices — or satellites on the Ku-band. Ka is a higher frequency signal that can handle a lot more capacity than a Ku satellite. In fact, most of the Ku satellites out there — many of which are serving aircraft — have less than 5 percent of the capacity of our ViaSat-1 satellite. Ka satellites also have more allocated spectrum (sort of like having wider lanes on the highway for traffic).

Most other in-flight Wi-Fi operators also lease capacity from satellite providers, whereas we own our satellites, which means we can optimized the entire system to provide more bandwidth at a lower cost. So, higher speeds and lower cost — you can see why airlines are looking to add the Viasat in-flight internet service on their planes!

Providing high-speed internet on airplanes isn’t just about passengers being able to email in the air. With a service fast enough to stream video, airlines are able to move away from seatback screens in favor of letting people enjoy content on their own devices. This BYOD (Bring Your Own Device) approach also delivers environmental benefits, as the aircraft weight is reduced as it no longer needs seatback screens or wiring, and it can reduce the amount of fuel used on every flight – as the plane is lighter without the seatback technology. Now you have the freedom to stream your favorite content and use the apps you prefer – on your time, and on your device.

Having a connected plane is also good for the crew and maintenance teams. Pilots, for example, used to leave the airport with the latest weather report that could be outdated the moment they took off. With an internet signal, they can get real-time weather updates to help navigate around storms better than they ever could before. Also, flight data can be sent back to the ground in near real-time, adding an extra level of safety and performance optimization to the flight.

Meanwhile, flight attendants with connected devices can communicate with the flight deck, keep better track of passenger needs, help manage connecting flights, get in touch with medical help on the ground if necessary – and a whole lot more.

So even if you’re the kind of person who’s happy to be offline and crack open a book on a long plane flight, having a connected crew can help you in other ways you may not have thought of. It’s all part of a changing air-scape where online connectivity offers a whole new world of entertainment and communications possibilities. This is the new connected aircraft, where Viasat innovations deliver a better experience to everyone on the plane.