Comparing internet providers: How satellite stacks up against DSL, cellular and wireless

DSL, cellular, fixed wireless and satellite are still among the best options for internet service outside urban areas 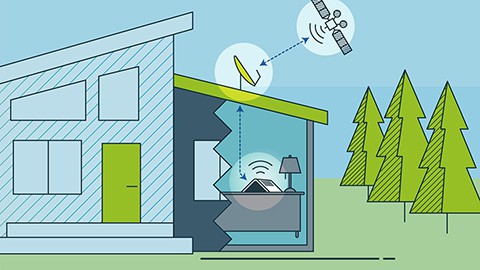 For underserved areas, internet options are getting better. But weigh the pros and cons before choosing your next internet service provider

According to Pew Research, nine out of every 10 American adults use the internet today, but the way in which they use the internet can vary widely based on the service provider availability and the service level package they choose. For example: If you live in an area that’s unserved or underserved, your options may be more limited compared to places well-served by cable and fiber.

Choosing an internet service provider (ISP) goes beyond how much the service costs. Some of the factors to keep in mind when selecting an ISP relate to how well the service does with page-loading speed, video streaming speed and quality, as well as how much time you can spend online.

If it’s the first time you’ve had to consider these issues, it can be confusing. So here’s a look at the most commonly available internet options for people living and working outside urban areas. (And keep in mind, even some urban areas have pockets where ISP options are limited for various reasons.)

DSL, which stands for digital subscriber line, uses telephone lines to transmit data. Subscribers need to have telephone service to use it, but can use the phone and internet simultaneously. It’s relatively inexpensive and reliable, and speeds can be good – though typically not as good as cable or fiber.

DSL may not be the best choice if you do high-definition streaming, high-volume downloading and file sharing because speeds may be too slow to support these tasks. Also, DSL works best when the home or business is located close – about 3 miles – to the telephone company’s nearest street cabinet (sometimes called the “home office”), in which the equipment required to transmit signals is stored.

The greater the distance your home is from that equipment, the weaker the signal becomes, and the slower the service. That’s why you might see the same ISP advertising very fast speeds in one area, and much slower ones elsewhere. It’s all related to location.

There are also several different types of DSL technologies available – with some newer types better than older ones. So check with your local provider to see what’s available near you and how close you are to a good signal.

Using your mobile network for all your internet needs is doable but not ideal – especially if you live in an area with spotty or non-existent coverage. Just like Wi-Fi, the weaker the signal strength, the slower the speed at which your mobile hotspot can function – regardless of network congestion. Using this option also requires a mobile contract that includes hotspot data and a generous, or unlimited, data plan.

It’s a tempting way to go for many reasons: There’s no setup. Just activate the “hotspot” setting on your phone to create a local network that lets your laptop, tablet and other devices connect to the personal hotspot. It’s mobile. Billing is simple – instead of paying both an ISP and cellphone bill, you’ll only pay the latter.

But the downsides are significant. More frequent cellphone use and increased streaming means a faster battery drain and a much greater likelihood of hitting data caps or restrictions – at which point speeds will decrease on most plans. And if your main goal is to stream, keep in mind hotspots don’t always connect to all smart televisions or streaming devices. And even if it does, you may not be satisfied with the picture quality.

Relying on mobile for your primary ISP can also be a hassle because when the phone leaves the house, so does the signal. Unless everyone in a household house has a phone with hotspot service, that can be a big issue.

Fixed wireless broadband is transmitted from a ground station via radio signals to a subscriber’s home or business.

Since it requires minimal infrastructure — just a small antenna on the building — it’s a popular option for people living in rural areas. Fixed wireless providers typically don’t set data caps either. It also has no latency issues, so customers who are into online, gaming, VoIP and other uses that require low latency like this technology.

But using fixed wireless requires line-of-sight between the transmitter (typically mounted on a tower) and home or business. That can be a significant limitation since hills, buildings and even trees can obstruct the signal. The service can also be negatively affected by rain, fog and other weather. In addition, these ISPs often oversell the service, meaning service can get slower as more subscribers are added onto their network.

Satellite internet is available almost everywhere, and doesn’t rely on phone lines, cables or other infrastructure. Users just need a small dish on their home and a clear view of the southern sky. It’s also much faster than it used to be. Viasat offers plans with speeds up to 100 Mbps in some areas – and broadband speeds of 25 Mbps in most others.

It’s also resilient. While satellite can undergo temporary disruptions during rainstorms and other weather events, it’s generally not affected by downed lines, cut cables and other issues that often disrupt terrestrial-based providers. Satellite does rely on ground stations scattered around the country, which are connected to the internet via fiber. But since they’re interconnected, one going down typically doesn’t impact service for very long — if at all.

One challenge with satellite internet is that it has higher latency than others, which refers to the time it takes the signal to go up to the satellite in space and back down to Earth. This is typically not an issue for web browsing, or some streaming services—and in fact, Viasat is making significant enhancements to its network to improve the user experience.

On the flip side, today’s satellite service may not be ideal if you’re into first-person multiplayer gaming or use some Virtual Private Networks (VPNs); however, companies like Viasat are looking at ways to augment its services to provider a lower latency experience. Additionally, some satellite providers now offer unlimited data options — although your speeds may still be temporarily restricted after you use your allotted base data, which is defined when you choose your service plan.

For those in unserved or underserved areas, satellite is a solid choice that’s constantly getting better. Speeds are increasing – with greater leaps expected in the next few years – and packages are becoming more generous as technology lets providers like Viasat adjust bandwidth to meet customers’ needs.

To choose which service is best for you, think about what kind of speeds you need and what you can afford along with learning which services are available in your area. Chances are that even in parts of the country that are underserved by terrestrial providers like fiber and cable, there still exists good options with satellite. Wherever you’re located, there should be no need to be on the wrong side of the digital divide.