Capability where it counts: Empowering the tactical edge 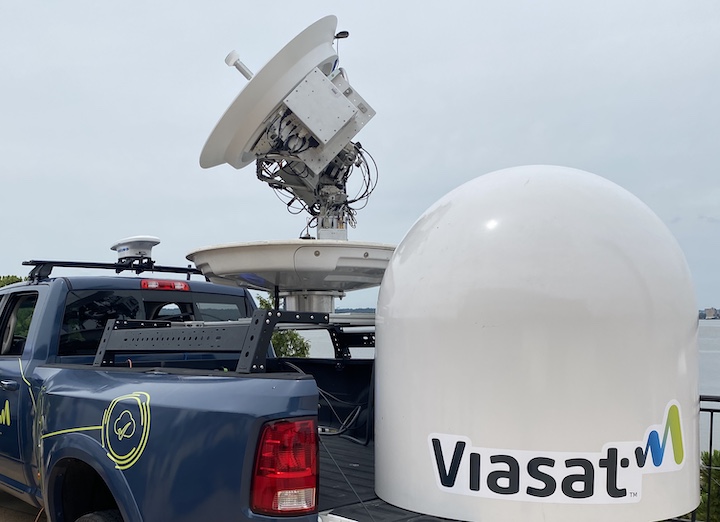 One of the distinguishing characteristics of the Pacific theater is its vast geographic expanse. The huge distances involved, combined with the ability of adversaries in the region to jam and intercept communications, mean U.S. military communications and networking are challenging even in peacetime operations — and much more so during times of conflict.

But the Department of Defense has a vision for how a networked force can prevail should such a conflict ever arise. That vision, dubbed Joint All-Domain Command and Control, or JADC2, relies on connecting frontline forces on land, at sea, in the air, in space, and in cyberspace so they can act together fast enough to overwhelm the enemy. Those multi-domain operations need robust, resilient, high-bandwidth communications, not just between forward-deployed units and the rear echelon, but also tactically, between deployed forces.

One example: Littoral Operations in a Contested Environment, or LOCE, where U.S. forces have to maintain a presence just offshore, under fire or subject to other measures such as jamming or interference — perhaps to support an expeditionary landing force. Surveillance data from drones or satellites showing potential enemy positions and movement can be parsed and analyzed in the rear echelon cloud, where the needed computing resources are less constrained.

But the resulting intelligence must still be pushed out in real time, not just to a deployed command HQ, such as a marine expeditionary unit, but all the way to frontline forces as well. That means forces deployed at the tactical edge need access to robust, high-bandwidth communications and high-capacity computing that will keep working, even under fire.

That capability was exactly what Viasat and Amazon Web Services (AWS) demonstrated at the recent Navy League Global Maritime Exposition: Sea-Air-Space 2021. With a kit that could be carried on a pickup truck and a trailer or deployed on a Littoral Combat Ship, the companies were able to provide completely new capabilities to frontline forces. Applications like real-time image recognition on a live video feed, which require reliable, high-bandwidth communication and high-powered computing (previously available only at headquarters level), now can be used by warfighters in combat. It’s a capability for them, or indeed for aid workers in a disaster zone, where the adversary isn’t an opposing force but degraded infrastructure and overwhelmed comms channels.

“The communications concept is known as PACE — Primary, Alternate, Contingency, Emergency,” said Viasat network engineer John McCann. “So if your primary channel goes down, you fail over to the alternate. And if that becomes unavailable, you use the contingency channel. You still have the emergency channel as a backup at that point.”

That PACE capability was central to the Viasat and AWS demonstration.

“We showed that we can take all these different pipes — dual-band Ku/Ka SATCOM, our LTE, local RF nets — and fuse them together in a seamless way with our Net Agility software and software-defined networks,” McCann said. “When all the channels are working, you get to use them all to enjoy high bandwidth."

But if one or more of these channels fails or gets jammed, the software automates the PACE procedure. The network will fail over without the need for user intervention. And if the channel comes back up, the network starts using it again automatically.

If local channels are jammed, SATCOM links can be used for ship-to-ship communications. And even if a littoral deployed force were to be cut off from the rear echelon, the LANs and WANs running over LTE or RF links would continue to function, according to Steve Conklin, maritime product engineer for Viasat Government Systems.

“We push all of our capabilities down through the local area and right out to the edge — the sailor or the marine on the front line,” Conklin said, adding that those capabilities are plug-and-play. “The user doesn’t need any expertise, or to think about switching to a new channel — it all just happens automatically in the background.

“We see that as a capability that not only the military but commercial companies can use, thinking about disaster zones — or anywhere that you're trying to keep your communications up and your systems running in a challenging environment.”

And because it relies on software-defined networking, Net Agility can run on a user's existing hardware, McCann said.

“We can run it on any server you want,” he said. “We've run it on Raspberry Pi's, a little ARM — we can run this thing on almost anything. That's the whole point. We don't want you to have to buy new equipment to run our stuff. We want to offer greater capability with your existing equipment.”

“It’s a capability that adds significant value in a variety of challenging edge environments,” added Jeff Richards, the AWS Solutions Architect working with Viasat. “It could be a large forest fire, an earthquake, or a combat zone. When our customers are at the leading edge of the situation, AWS Snowball Edge delivers computing and connectivity at their fingertips.”

These resilient, high-bandwidth communications give tactical advantages to commanders by providing them the information and analysis they need to make life-or-death decisions faster than the enemy. I'ts what the military calls “shortening the kill chain." Bu using many different networking capabilities, they ensure that commanders can both stay in contact and provide the networking capabilities that will be needed in the future for multi-domain operations under JADC2.

It also enables the kind of high-capacity compute traditionally associated with the cloud — capabilities such as real-time video distribution and processing, or object and facial detection and recognition. They’re familiar, for example, to UAV pilots . But until now, they’ve been unavailable on the front line.

Viasat and the AWS Snowball Edge have changed all that.

The AWS Snowball Edge is a ruggedized, plug-and-play server, available with up to 256 GB of RAM, up to 80TB of storage and up to 52 virtual CPUs. Those capabilities allow it to run large-scale applications on live-streaming video at the tactical edge.

“You can deploy it from an aircraft, and it can tolerate impacts of up to 200G,” Richards said. “And it can operate in temperatures of up to 113 degrees Fahrenheit.”

The AWS Snowball Edge is fully encrypted, meeting FISMA High, FedRAMP ITAR, CJIS, and DoD SRG Impact Level 6 requirements. Once powered up, any usage requires access credentials only available to the owner of the AWS Snowball Edge account, via the AWS console. These credentials are not permanently stored on the device and are erased after loss of power.

“If you do not possess those credentials, the device is effectively a brick,” Richards said. “If it were to fall into the wrong hands, access to data held on the device would be impossible.”

The Sea-Air-Space Exposition demonstration showed how Viasat’s high-bandwidth, redundant connectivity linked the AWS Snowball Edge with the Amazon Rekognition image and video analyzer service in the rear echelon cloud. This service enables surveillance video from local sensors, drones or even satellites to be analyzed and annotated, then pushed back out to the AWS Snowball Edge — not just to a deployed command element like a naval vessel, but, using Viasat’s ELITE communications kit, to frontline warfighters on handheld devices.

The demonstration illustrated how real-time, A.I.-augmented situational awareness can be deployed right where it’s most needed: at the Tactical Edge.

Almost home: The demo truck and trailer in Phoenix on its way back to Carlsbad, CA.

Because only the Navy is allowed to have real ittoral ombat , McCann and Conklin mounted their demonstration on a Dodge Ram 3500 pickup and drove it across the country from the Viasat facility in Carlsbad, CA, to the Sea-Air-Space event in National Harbor, MD.

The rig featured a fixed 1-meter antenna mounted on the truck, plus a mobile 18-inch dish, hardware for the Net Agility software to run on, and ELITE peripherals — all in a trailer. AWS provided the AWS Snowball Edge and the Amazon Rekognition cloud video processing.

On the way back to Carlsbad, Viasat network engineer John McCann and Steve Conklin, maritime product engineer for Viasat Government Systems, played a little bit of “Where’s Waldo?” posting photographs of the truck — dubbed “Speedy” —on social media and asking followers to guess their location. But they also demonstrated the geographical reach and deployability of the rig by getting it up and running in hotel parking lots along the way.

“We tested it on the way back, bringing the system up in Indianapolis, Oklahoma City and Phoenix,” Conklin said. “It worked everywhere, just as designed.”