Viasat's Carlsbad headquarters is expanding, with a new campus rising just across the street from our current location. 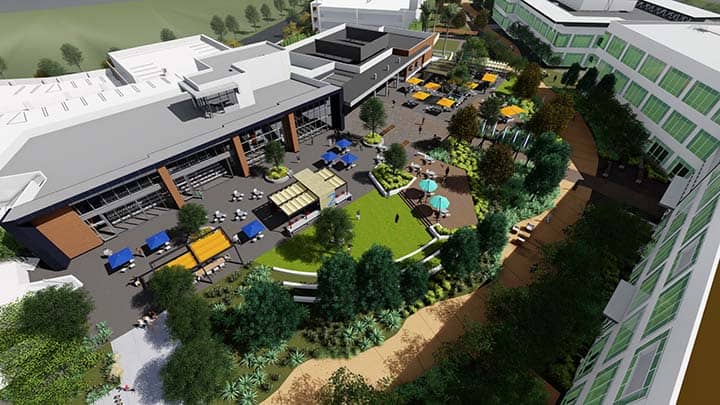 Designing the campus of a fast-growing company that inspires both productivity and playfulness is a tall order. But Smith Consulting Architect’s (SCA) Mark Langan believes the plans for Viasat’s 23-acre expansion of its headquarters will do just that.

It’s evident in obvious features like co-labs situated just outside individual offices, a 4-acre courtyard with spaces for hammocks and outdoor meetings, and a restaurant that will change its look to match the cuisine it offers each day.

“It’s about creating a nice environment for employees to be in, to want to come to and be at work,” said Langan, SCA vice president and project manager of the Viasat expansion. “All of these things are good for employee efficiency and play into how employees function.”

Those details aren’t intended exclusively for employees who’ll have offices in the new buildings. Viasat’s senior staff directed SCA not to duplicate amenities from the original campus to the new one. That’s intended to expand the number of benefits while encouraging more employee interaction. Those who want to play volleyball will still bump, set and spike at the court on the west side of El Camino Real, and employees who want to do yoga in the courtyard or sample the food hall cuisine will do down-dog and lunch on the east side.

“It’s about creating a nice environment for employees to be in, to want to come to and be at work.” Marc Langan, SCA Architecture

SCA did significant research before finalizing its expansion plan – including visiting Microsoft’s Seattle headquarters to see what elements there could be fits for Viasat – but it already had a solid understanding of Viasat’s needs. 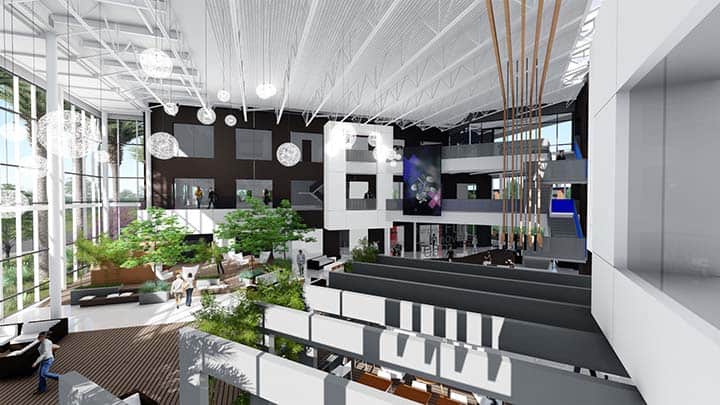 The design of the new Viasat campus includes interior spaces that make for a pleasant, collaborative place to work.

The firm created the original design for the developer of the current campus; Viasat opened there in 1999. SCA added the volleyball and basketball courts at Viasat’s request. All told, it’s designed more than 340,000 square feet throughout six buildings on campus.

Most recently, it transformed the space between Buildings 10 and 11 into The Grove, a 20,000-square-foot outdoor area complete with comfy chairs and couches, games and handy USB ports. The area is surrounded by parking lots, but the addition of a bamboo perimeter, mature trees transplanted from the east side construction site, shade structures and other elements have made it into a sanctuary.

“That was something of a beta test site of some of the elements we’ll incorporate into the (new) campus,” Langan said. “We wanted to see, ‘Do these work? Will people use them? Are they the right scale?’, then take that information and use it at the new campus. We’ve gotten a tremendous amount of compliments on how it functions.”

“We’ve included open spaces within easy distance to any office so there’s always an opportunity to interact,” Langan said.

Passers-by will notice a visible difference between the west and east side, Langan said. The new buildings will appear more contemporary, but still clearly reflect their professional purpose – a quality that will permeate the entire 23 acres.

“It’s a blend of fun and corporate,” Langan said. “Striking that balance has made this an interesting and exciting process.”

The expansion will include six office buildings, three parking structures, the café/conference center, courtyard, trails and other amenities. The first two buildings and the courtyard are under construction and expected to open in August 2018. 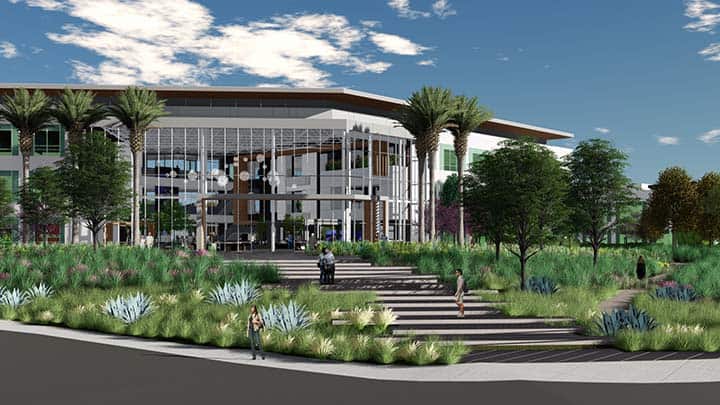 A view of the entryway to the new Building 12. SCA Architects 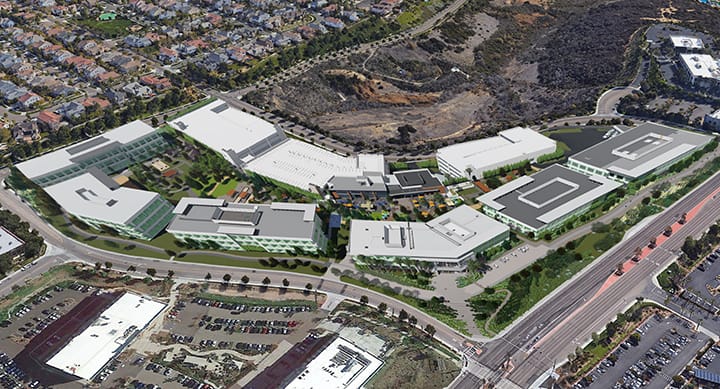 A rendering of what the new Viasat campus could look like when finished. SCA Architects