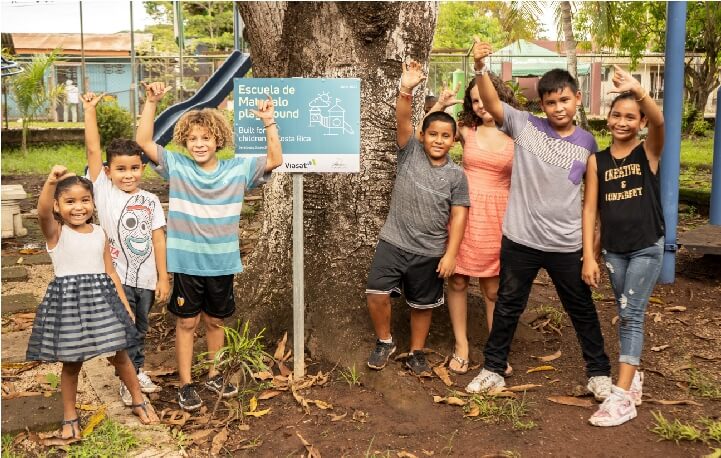 Several local children gave the new equipment a test run and a thumbs up in June. Students will return for the new academic year in mid-July.

The budget for Costa Rica’s Matapalo Elementary School does not include a line item for recreation. Their funds simply don’t stretch that far.

“A playground, from a North American perspective, is something every school should have; here, it’s a luxury,” said Lindsay Losasso, school board president. “We don’t have enough money to do the basics in our school. The electric was really messed up, and we had to take out a loan to pay for that.

“The ministry of education doesn’t have enough money for infrastructure. So if any school wants to do any maintenance or infrastructure improvements, they have to find the money themselves.”

The Escuela De Matapalo has 210 elementary school students and a per-student budget of about .42 cents a day. By contrast, U.S. education spending for each public school student is about $33 a day.

While kindergarteners have a very small playground, the older children entertained themselves on breaks playing soccer in a dirt field.

That all changed in June, when volunteers representing Viasat helped build a playground at the school. Viasat partnered on the project with Kids Around the World, a nonprofit that works with organizations to establish playgrounds in poverty-stricken communities.

The project was originally planned as part of the Club Viasat 2020 retailer incentive trip, with retailers set to build the playground. Due to the pandemic, the trip was canceled. But to the delight of the community’s children, the playground construction moved forward.

Kids Around the World, which has experience doing similar projects in Costa Rica and in many other foreign countries, coordinated the refurbishing of a recycled playground in the U.S. The nonprofit shipped the equipment and related supplies to Costa Rica, and also managed the volunteers to help build the project.

Losasso, who is also director of a community nonprofit called Futuro Billante, helped coordinate the project.

“It was a huge logistical challenge,” she said. “Everyone put so much effort into making this happen.”

The equipment shipped in 2020, and has been in storage in the Matapalo Community Center since then – waiting, like the rest of the world, for life to regain some sense of normalcy. A group of about 16 volunteers worked June 9 and 10 to install the equipment, dodging rain squalls and navigating around tree roots to do so.

“It was hard work, but now we have a really cool playground with very modern pieces,” Losasso said. “You can tell it was super well-made and would have been expensive. Our children will give it another 15-20 years of use.”

While school there won’t start for a few more weeks, a handful of children happily volunteered to give the equipment a practice run. Their smiles told most of the story; their words finished it.

“I love the playground; it is so beautiful,” said fourth grader Natasha. “Thank you very much!”

“As a member of the Matapalo School Board, I am very happy with the playground installed in our school as it will give our students a place to play together with their friends,” said school board secretary Laura Jaen. “I want to deeply thank the donors who made this project possible.”

Losasso plans to be there when the students return to school in mid-July.

“They’re going to go crazy,” she said. “I want to be there the first day back to see their reaction.

“Our schools were closed for the better part of the year, so it’s been really tough. Being able to provide some kind of joy, something fun for them at school, is very special. We’re grateful for this opportunity, and that Viasat stuck with it.”

Viasat’s Matt Shearer, who leads the company’s retailer channel, said all the feedback is gratifying.

“While we’re disappointed we could not share the experience with our retailer network, we are thrilled to have contributed – in a small way – to bettering the local community in Costa Rica,” he said.

The give-back events have become a tradition on Viasat’s retailer incentive trips. Retailers built a playground for children in Tahiti in 2016, and donated a satellite internet connection, computers and medical equipment to the village of Pac Chen, Mexico in 2018.