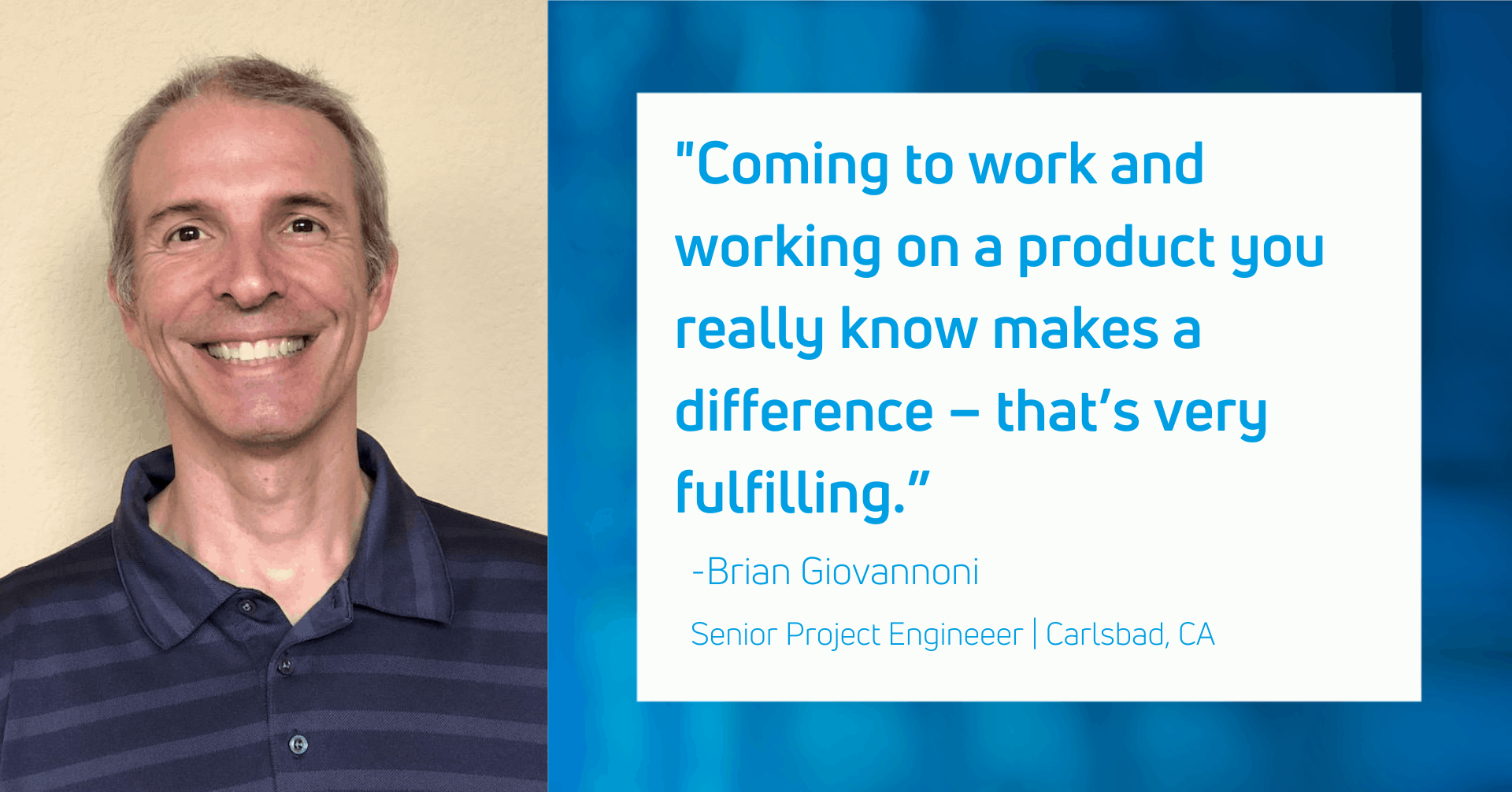 When Brian Giovannoni first arrived at Viasat 16 years ago, then senior hardware engineer Si Wang interviewed him while wearing flip flops and board shorts.

“I thought, ‘I could get used to this,’” said Giovannoni, who’d worked for more formal Silicon Valley companies in the past.

And gotten used to it he has.

“I live in shorts at work,” he said. “I hate wearing long pants, always have. The ongoing joke in our group has always been that if I’m wearing long pants, something’s going on. Basically, it must mean that there is a big customer meeting happening or the president is coming to town.”

The informal dress style piqued Giovannoni’s early interest in Viasat, but other things convinced him to take the job and stay. What captivates him most of all is the work he does. Giovannoni works on the government side of Viasat’s business as a senior project engineer in the NextGen Tactical Data Link (NGTDL) group. His team is developing the next generation of Link 16 military communications equipment – typically by making it smaller and lighter to more easily fit on more space-constrained platforms such as helicopters, where they cannot accommodate the size, weight and power of previous Link 16 terminals.

“Link 16 was developed in the mid-’70s, but the reason it sticks around is because it’s a very robust, secure waveform,” he said. “It’s the workhorse of the military waveforms. Before it was used primarily on large aircraft. Now all the various military branches are getting Link 16 requirements flowed down to them to implement into other newer platforms.

“So for us, it’s all about trying to find the next generation of Link 16 usage. It’s beyond cutting edge; we’re kind of using bleeding edge technology.”

Giovannoni leads the technical execution of various projects in NGTDL, including building up and mentoring the engineering staff. For him, directing the development of equipment the military relies on in often critical situations is deeply satisfying.

“Coming to work and working on a product you really know makes a difference – that’s very fulfilling,” he said.

A native of Santa Cruz, Calif., Giovannoni displayed an early interest in engineering. Influenced by his electrician father, he gravitated to math and science classes, leading to an electrical engineering major at the University of California, Davis.

Upon graduation, Giovannoni’s classmate Ethan Thompson immediately went to work for Viasat. While the two lost contact for several years, they’ve since renewed their friendship.

“When I came on with Viasat in 2004, there was my friend,” Giovannoni said. “Today we’re in the same group, and work just down the hall from each other.”

Giovannoni started his career in the Silicon Valley, where he married and had two children. While he enjoyed the work, the cost of housing during the dot-com bubble era inspired him and his wife to search elsewhere for a home their family could afford.

“Ironically, I moved to Southern California because at the time it was cheap compared to Silicon Valley,” he said. “We luckily bought a home in the late ’90s, right before San Diego real estate started skyrocketing.”

The family lives in Encinitas, which Giovannoni loves for its coastal vibe and small town feel. He loves Viasat for similar reasons – a relaxed culture and a growing company that’s maintained a sense of intimacy among its employees.

“Over the years, what I’ve really liked about Viasat is that they always give you the tools you need to do the job,” he said. “There’s this sense that you’re professional, they respect you to get the job done without telling you how to do it. And especially when my kids were young, I appreciated the flexibility.”

As Viasat has grown, he says that culture is still part of the appeal.

“It’s still got that small company feel in many facets. The biggest thing I respect and like about Viasat is the three cofounders are still with the company. To see that level of stability, and that they’re still in it for the love of technology and the company, has been really nice.”

Like most employees at Viasat, Giovannoni began working from home in mid-March. Recently, he’s returned to the office. Many members of the NGTDL team are considered essential employees and support critical programs that are ongoing.  Specifically, those are people who work on the assembly, test and support of the product where having access to the lab and production facilities is important and can’t really be done remotely. Only about 15 people on the approximately 100-person team are now in the office.

While he misses his other coworkers, Giovannoni said he feels comfortable at work.

“Viasat’s been very proactive in how they’re dealing with the virus. They’ve done a good job of making it a safe environment with masking, cordoning off areas, making sure we social-distance,” he said. “I’m in my office most of the time. But having occasional human interaction, being able to talk to somebody in the hallway – socially distanced, of course – has been nice. You realize that (pre-virus), you took it for granted.”

After 16 years with the company, Giovannoni said the Carlsbad campus has also come to feel like home. And for someone who once envisioned a career that would take him from company to company, that’s come as a pleasant surprise.

“I didn’t know if I’d ever be at a place very long, just because I’m very inquisitive and interested in various technologies, so if you’d asked me 16 years ago if I’d be in the same place, I probably would have said that was crazy,” he said. “But I’ve always been challenged workwise here. The benefits are fantastic. I’m very, very happy at Viasat. I see myself here for a long time to come.”