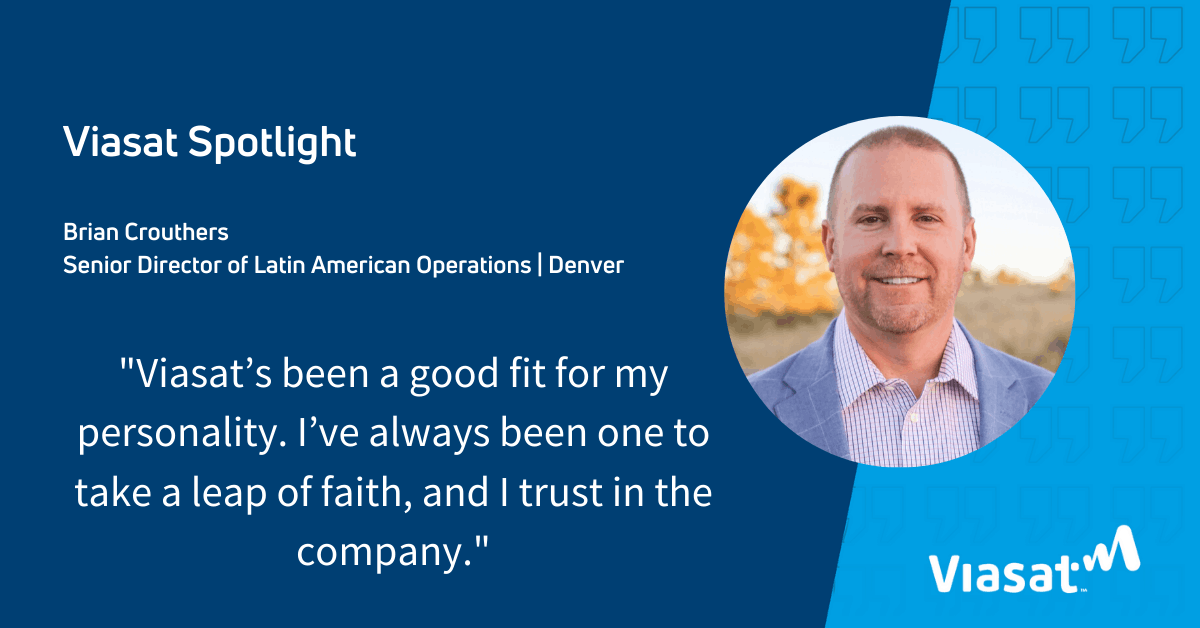 Brian Crouthers, Viasat’s senior director of Latin American operations, has built a career taking on jobs outside his comfort zone. It started at 17, when he refused to accept the base-level posts offered to him as a new Navy recruit.

When the enlisting officer said the only available positions were deck hand and cook, Crouthers responded that the Navy likely wasn’t for him. So the officer searched his files again, and found an opening for an electronics technician. While he had no experience in electronics, Crouthers knew the work would provide better long-term career opportunities. He said yes, and launched into a crash course in his new field.

“In 20 weeks, you’re an electronics technician working on shipboard equipment; you learn the trade,” Crouthers said.

The Tucson, AZ native took another early and consequential life step: At 19 – on the way to his first ship deployment – he married his wife of 26 years, Shannon. Both decisions helped set the course for all that’s followed.

Crouthers’ electronic skills and nearly a decade in the Navy put him in position for the career steps that have followed, which have included posts at Cox Communications, EchoStar, DIRECTV and, ultimately, Viasat.

His work progression eventually brought him to Denver, and to Viasat.

As he moved up his career ladder toward Viasat, Crouthers began taking on management positions. That meant overseeing people, but managing groups that often included a wide range of departments – field engineering, training, quality and supply chain management – all while growing revenue for those companies.

Juggling such a variety of responsibilities didn’t deter Crouthers; rather, he found he had a talent for it.

“I really like the start-up environment,” he said. “I like a little chaos, and the fast pace. Then once it’s running and the wheels are turning, I feel it’s time to go try something different.”

It’s a pattern he’s continued to follow at Viasat, where Crouthers feels his yearning for change and new challenges has repeatedly been met.

“Viasat’s been a good fit for my personality,” Crouthers said. “I’ve always been one to take a leap of faith, and I trust in the company. I’ve never been afraid to try new things here because, even if it’s not the perfect fit, I know there are always other interesting challenges at Viasat to focus on.”

In 2017, Crouthers decided it was time for another big change.

“Viasat was launching the Latin American division, and I decided I wanted to do something different,” he said. “Latin America fit the bill for me. I love to travel. It was a new challenge, a fast pace and something a little out of my comfort zone.”

Crouthers adjusted quickly to the job, including the frequent travel. And as he’s done in the past, he’s successfully juggling a broad range of responsibilities.

“Our team is primarily responsible for getting us set up in Mexico and Brazil from a residential consumer perspective,” he said. “That’s meant hiring, identifying partners in those counties, incorporating our launches in both countries and – where it makes sense – incorporating our standard U.S. processes and teams. Where it doesn’t, we look to identify how we work through those situations. I’ve had to dabble in marketing and sales, things that are definitely outside my norm.”

The coronavirus brought traveling to Latin America to an abrupt halt. And while he’s enjoying a respite from travel and more time with his wife and two daughters, the work he revels in continues.

The U.S.-based portion of the Latin America team is relatively small, so there is no lack of work to be done.

“All of us have become a jack of all trades; everybody’s doing everything,” he said.

Despite that, and even in the strange environment of lockdown, Crouthers can’t imagine working anywhere but at Viasat.

“Every day’s a challenge,” he said. “It’s definitely not a mundane job. You’re not sliding the same piece of paper back and forth across the desk every day.

“You never dread going to the office because of people drama and personality conflicts. Everyone is genuine. I love the people; they’re just good.”