Viasat exec zeroes in on accountability

In COO Kevin Harkenrider’s popular class, he says excuses are the enemy of an effective leader 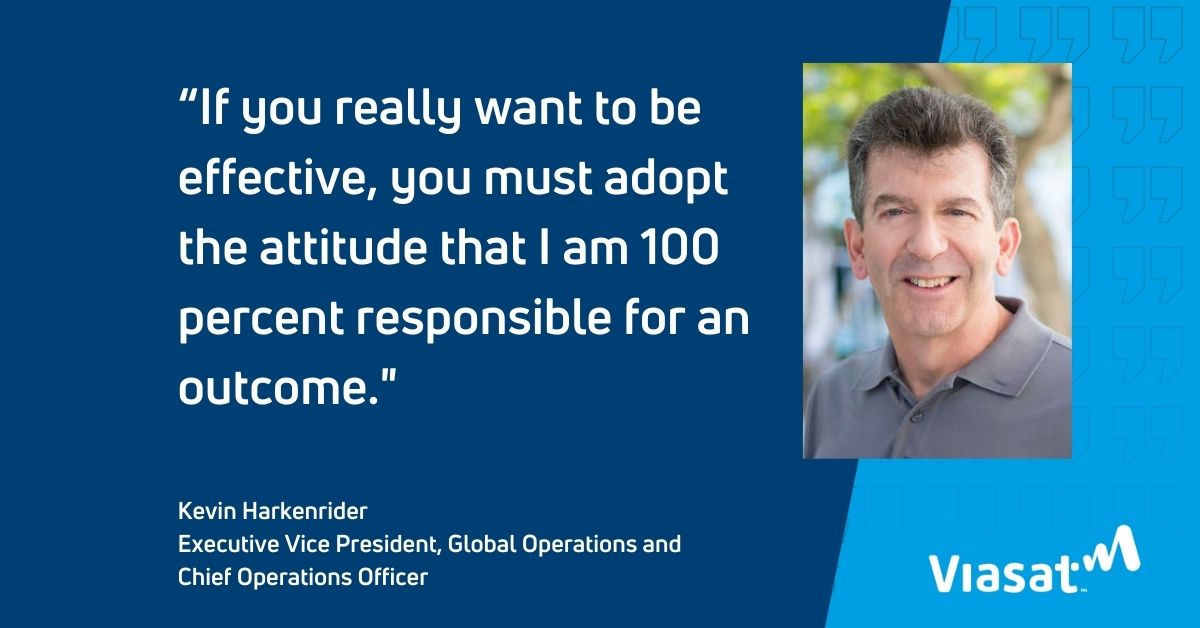 Viasat Chief Operations Officer Kevin Harkenrider has taught his “Creating a culture of accountability” class 58 times in nine years. Each offering still has a waiting list.

“I think if more of us took responsibility, the company and the world at large would be a more positive place, so I guess this class is my attempt to change the world,” he said. “If not me, how can I ask or expect anyone else to do it?”

The class, recently offered for the first time on Zoom, may not yet have changed the world, but it has changed the lives of many Viasat employees. Among them is engineering director Munther Hammouri, who’s taken the class three times – once with his wife.

“One of the things it teaches you is that you have control over a lot more than you think you do, and that’s empowering,” he said. “It taught me even more how important it is to come through when you make a commitment. And if you’re not able to come through, how to handle those situations.”

For Hammouri, the class’s impact went beyond his work habits.

“This is a class that not only impacts a person’s career, but their life – doing what you say you’re going to do, showing up on time.  It helped me with work, but after taking the class, my relationships also took a turn and became a lot stronger. It’s really about how to be a better person.”

Harkenrider started teaching the accountability class in 2012 after several executives brainstormed ideas for company classes. Director of Learning and Development Kaitlin Tate helped him create the class, based off the work of organizational consultants Dr. Charles Dwyer and Robin Reid.

Harkenrider added his own distinctive style.

“I’m what I call a provocative teacher,” he said. “I enjoy engaging in some enlightened dissent.”

That typically means encouraging class participants to offer examples of workplace issues, then explaining how their responses played into the situation and how different responses could change the outcomes.

“I want you to recognize your internal coping mechanisms,” he said. “We internally rationalize when we’re unable to meet a commitment. We do things to cover ourselves.

“We do it because our self-esteem is only retained when we can rationalize our failure. I also believe we fear if we hold others accountable, they may not like us and therefore we don’t do it.”

The urge to rationalize rather than change our circumstances is deeply rooted. According to Dwyer, children develop rationalization and self-esteem preservation skills at around age 3.

“I call it excuses,” Harkenrider said. “We blame the world around us. When you think it’s the other person who has to change, you will give up. All these behaviors keep you stuck in a status quo.

“If you really want to be effective, you must adopt the attitude that I am 100 percent responsible for an outcome. When you focus on this, there’s nowhere for you to hide so you start doing other things, asking others for help, and pondering ‘what else could we try?’ It won’t of course guarantee your success, but your chances for success are no longer zero.”

Several phrases – among them ‘I couldn’t,’ ‘I can’t,’ ‘I had to’ and ‘If only’ – are red flags for evading accountability. They’re phrases Harkenrider doesn’t want to hear.

While Harkenrider is often blunt in his assessments and recommendations, he lives the message he preaches: constantly categorizing essential tasks, prioritizing and renegotiating to ensure he meets his commitments. His end goal, and the goal of his class, is to inspire and motivate Viasat’s employees – actions that can then trickle down throughout the organization.

“Frankly, I don’t care much about your problems; I care about your commitments,” he said. “I want to know how you overcame. If you think a reason is an OK for not getting an outcome, you will stop trying. I don’t want you to ever stop trying.

“And if you are the model of personal accountability, the probability of your team modeling that behavior is much higher.”