In recognition of Black History Month, we asked some Viasat employees to talk about their heroes – either from history or in their own lives. Here are their responses: 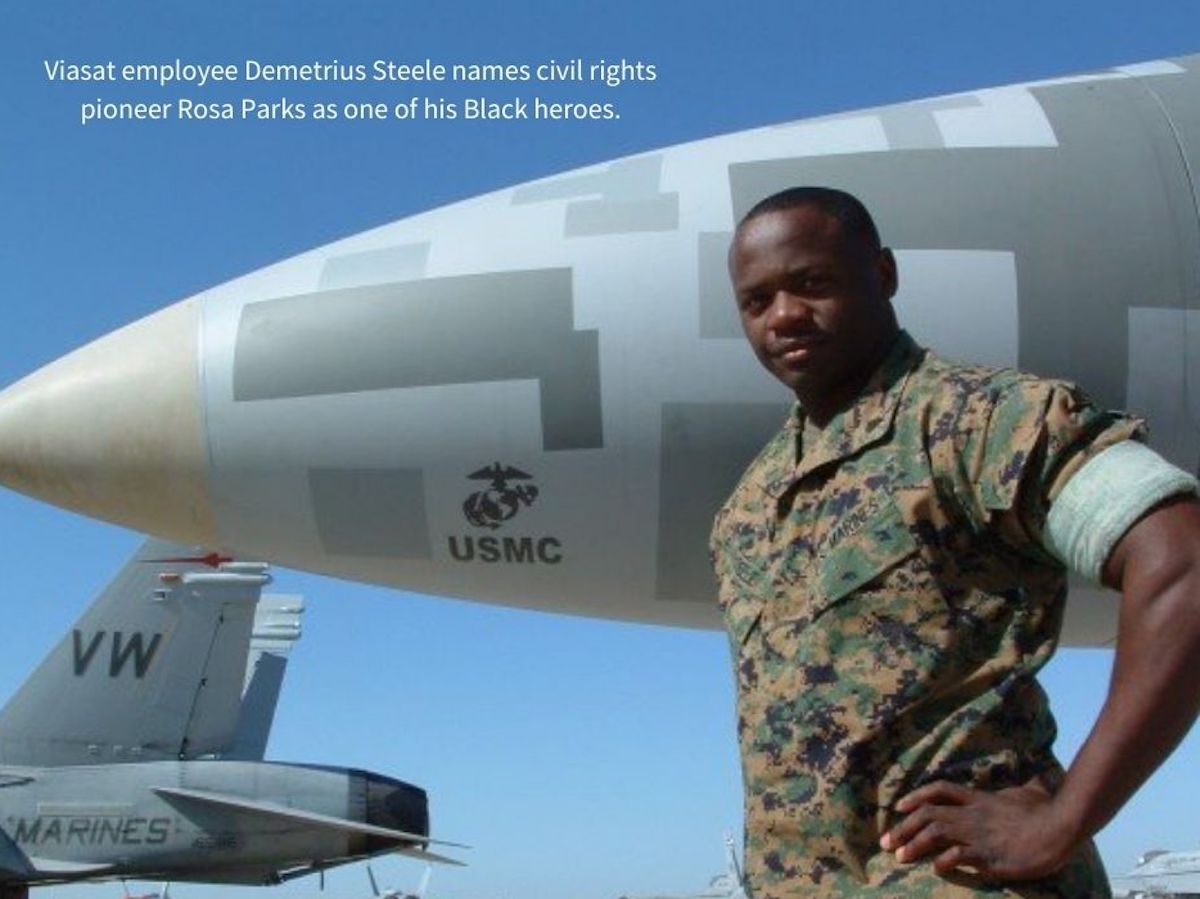 My inspirational figure in Black history is civil rights leader Rosa Parks. It took courage and bravery for her to refuse to give up her seat on that bus – especially during a time when Blacks were beaten or even killed for standing up to white people or the law. She, along with others civil rights supporters, led the charge for change. And because of the struggles they endured, I'm able to work, live and play alongside people of all ethnic backgrounds as equals.

I would like to highlight Katherine Johnson. Johnson was a physicist and mathematician who was instrumental in NASA’s use of digital computers. Johnson was awarded the Presidential Medal of Freedom in 2015 (by President Barack Obama) for her pioneering work that led Black women to work in science, technology, engineering and mathematics.

Someone who is a Black inspirational figure to me is Robert Smith, the founder and CEO of Vista Equity Partners. Smith is philanthropist who gives back to his community and provides scholarship opportunities for people of color to attend college. He inspires me to create change with impact for the minority community throughout the world.

My father, Dr. Andrew Keith Mann, is my hero. He accomplished so much is his short 40 years on earth. He received his his doctorate in philosophy from the University of Illinois Champaign/Urbana. In the early ’90s, my parents and I moved to Denver, where my father was a computer technology professor at Metro State University.

Even with all of my father’s sickness – he was a two-time kidney transplant recipient – he never complained or fell into despair.

After he passed, Metro State University established the Keith Mann Memorial Endowed Scholarship. It describes him as “a faithful and courageous faculty member … always positive, full of hope and laughter.” This scholarship will help students for years to come. I will always love and cherish the time I had with my father on this earth.

I can think of none better than my father, Walter J. Person. As someone who leads by example, I have him to thank for my work ethic and determination to get things done. Even today he is still the hardest worker in the room. My dad is selfless, kind, loving, and more things than I can possibly describe in just a few sentences. He has always been there for me and will always be my biggest inspiration.

A personal hero of mine and a truly inspiring woman is Dr. Gladys West, a mathematician and programmer whose mathematical models contributed to the creation of GPS. She was a trailblazer and worked at the Naval Proving Ground in Virginia where she was one of only four Black employees. Her ability to excel in an environment dominated by white men during the civil rights movement is truly inspirational and speaks to her tenacity. Dr. West is one of the women who paved the way for Black women in technology and is a significant figure not because of her race and gender, but because of her accomplishments that have made everyday life easier for all.

As a tinkerer since childhood, one of my heroes has always been Lewis Latimer. Born the son of slaves in 1848, he is the inventor credited with patenting the carbon filament for the incandescent lightbulb.

Something that seems so small may go overlooked, but you are undoubtedly reading this text on a computer screen powered by lighting technologies, while sitting in a lighted room – all of which have roots in that same innovation. Given our goal here at Viasat of lighting up the world in our own way, Latimer’s contribution is particularly significant.

Connecting the world to improve it for the better takes time, innovation and, more often than not, vision that can seem outlandish. Reflecting on the innovations of heroes like Lewis Latimer and understanding the lessons that they convey can help steer our course as we navigate uncertain times in this pandemic and an ever-evolving technological landscape.

American engineer, physician, and former NASA astronaut Mae Jemison is one of the pioneers who helped influence my career in STEM.

Like Mae, I was discouraged from pursuing engineering in high school. As a youth, reading her story of overcoming the limitations that her teachers placed on her academic future not only spoke volumes but opened a world of possibilities. Mae Jemison refused to accept these boundaries and used them as fuel to drive her to pursue a degree in engineering. She became the first African American female astronaut sent into space, bringing a new meaning to the phrase “reach for the stars.”