Behind the scenes at Devhack 2019, Viasat’s hackathon for its interns

A firsthand account of DevHack, Viasat's annual competition where everyone has the chance to learn 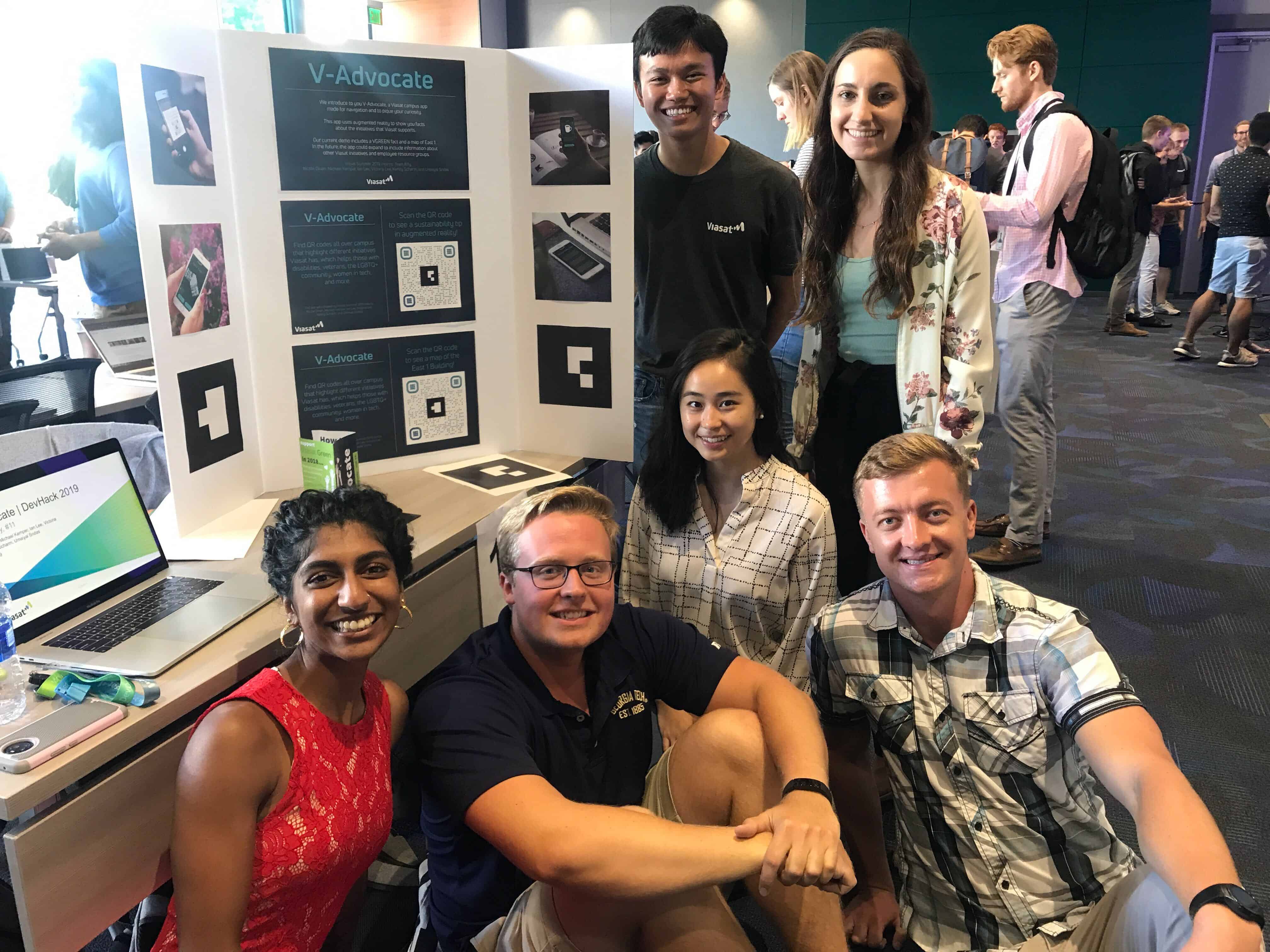 The competition is a chance for everyone to learn

DevHack is an annual Viasat event previously called Hackathon. All of the company’s U.S. interns are welcome to participate. The interns spend an entire weekend collaborating with other interns to develop Viasat-related ideas and pitch them to employee and executive judges. I am a corporate communications writer for Viasat and this is my account of the event.

It was Friday in July, and the workweek was ending. Interns from all over the country had been flown to Viasat’s global headquarters in Carlsbad, CA.

Technically, this was the first day of DevHack 2019, but it was not dedicated to working on projects. Instead, DevHack participants attended development sessions to help prepare them for the competition. The day began with a pump-up speech by Viasat Vice President of Global Mobility, Doug Abts, followed by a session on networking and first impressions. Lunch accompanied a business networking fair, where we met with employees that worked in all different business areas across the company. In the afternoon, Vice President of Engineering Kristi Jaska motivated the crowd with her own insight on our potential DevHack projects.

In true Viasat fashion, a weekend of hard work began with thorough preparation — as well as a celebration.

That evening, the interns bustled over to Moonlight State Beach for a laidback company- hosted beach trip filled with pizza, s’mores, and rounds of spikeball. Those who were more daring ventured into the Pacific’s waves. It was the epitome of a California evening, topped with balmy weather, a lavender-rosy sunset, and a general sense of tranquility wafting in the air.

For those not accustomed to playing on California beaches, it was surely a picture to remember.

From ideating to hacking

There aren’t many rules surrounding Devhack at Viasat. The categories we were given were very broad: This year, we could make a product that provided “a new perspective,” furthered the company’s “community outreach,” or had a certain “wow factor.” But I’m not well-trained in coming up with product ideas, so finding something both worthwhile and feasible to work on was my first hurdle.

Luckily, my teammates Umaiyal (Uma) Sridas, Michael Kemper and Kenny Scharm already had something in mind. As the three engineers on our six-person team, they knew they wanted to work with augmented reality (AR), since none of them had worked with the technology before. A hackathon is a great opportunity to start acquainting yourself with a new skill, they told me.

Uma wanted our product to help our employees with disabilities. She said she had a lot of friends with disabilities, and they were often frustrated by how inaccessible many places are. But she also had bigger ideas. She thought about providing a map that employees and visitors could use, and wanted to find a way to promote Green, the company’s sustainability initiative, too.

All of these ideas would be useful, we agreed.

But the transition from conceiving a product to working on it can be tricky. Working with other people requires an organized process that gets everyone — the engineers, the designers, and the marketers —  on the same page. Afterwards, everyone can go off and do their own tasks, but still come together at the end to create one cohesive product and selling campaign.

Our solution to our disorganization was called a “common understanding session,” which our user experience/visual design teammate Nicole Dinan introduced to us. It’s a concept often used as the initial step for a design sprint. There were five questions the team came together to answer:

The meeting was incredibly efficient. In the end, we knew we wanted to create an AR web app that would be a tool for our employee resource groups (ERGs) and special initiatives.

The importance of marketing

I’m not an engineer or a designer, so coming into DevHack I was unsure about my role and whether I could make a significant contribution to my project. How important is a marketing team in a Hackathon?

My team, “Team A11y,” generally agreed that our diversity of talent came in handy. While the engineers dedicated all their energy to figuring out the back-end (i.e., technical) part of our web app, our designer worked on what our app would look like to the user. During that time, I was working with the brand-strategy intern, Ian Lee, on a presentation that would convince the judges of our app’s usefulness. Our goal was to answer questions like “why do we need this app?” and “what would it be used for?”

Some teams don’t really need to clarify why their product is valuable. They’re usually products that are inherently needed or essential, like insulin medicine, so less convincing (and thus less marketing) is required. For example, one team came up with a feature on an Apple watch that alerts a warfighter if danger is nearby.

But products that just tend to make life better, like that kombucha you might want at the supermarket, need a lot more effort from the marketing end. While the product has intrinsic value, consumers need more explanation to realize their need for the product. And my team developed a product that was an enhancement, but not necessarily a baseline need.

After a little less than two days of hacking, we created an AR web app called “V-Advocate,” aimed at making Viasat a more interactive campus. Our employee resource groups usually send out emails about things they feel employees should be aware of, which we felt could be improved. So, we decided to create a platform that would be more interactive and intuitive, and thus be better at promoting these messages and/or resources.

As a prototype, we made two QR codes: one to support the Green initiative, which aims to make Viasat more sustainable, and another to be a resource for the Ability Alliance ERG. When someone scanned the QR code with their phone’s camera app, a website launched, which presented a useful tip or tool related to either Green or the Ability Alliance.

For the Green QR code, we put an AR animation of a forest, along with a Green tip about saving paper. For the Ability Alliance QR code, a map of a Viasat building popped up, with the accessible points of entry highlighted.

On Monday, July 15, we set up our tri-fold and pitched our product to a series of judges. Despite my introverted tendencies, this was my favorite part of DevHack, primarily because I had to confront my fear of the “elevator pitch.” As someone used to writing an entire paragraph to introduce the topic of an essay, the idea of having only 30 seconds to sell someone a product is a daunting challenge.

But all the effort we put into the common understanding session, along with the marketing work Ian and I did, made the pitch relatively painless. I had subconsciously drilled V-Advocate’s selling points in my head, so that when the time came, I could deliver the most compelling reasons for why our product was needed. By the time we had to present to Viasat Vice President of Engineering Kristi Jaska, I could rattle off V-Advocate’s selling points like it was second nature.

After two hours of judging, the awards were announced. My team didn’t win our category, but we all agreed that we had a great time. The experience was certainly an inspirational testament to what a great team can do.

And next year, a whole new group of interns will descend up on the Viasat headquarters for DevHack 2020.