Viasat likes to add local color to its campuses, and street artist Truth was able to provide plenty of that for two new locations in Texas. 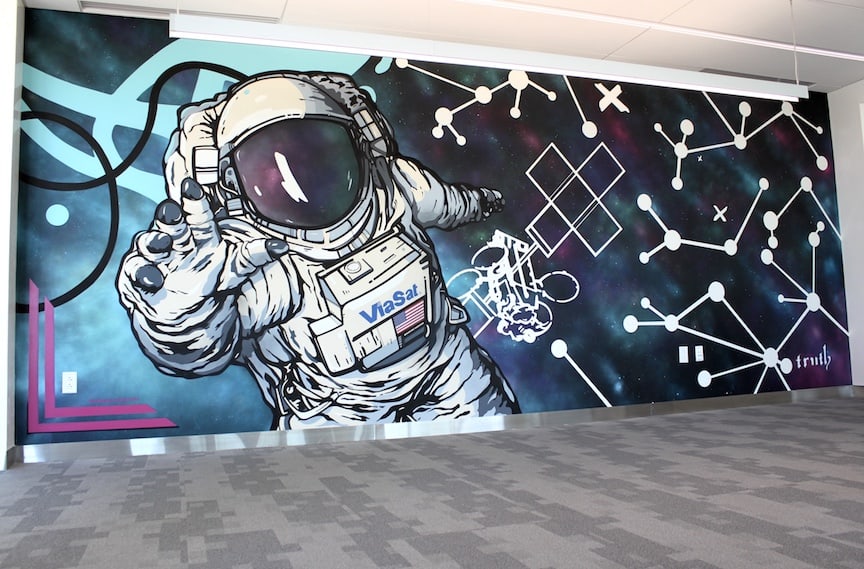 Mike “Truth” Johnston’s outdoor art murals are a familiar sight in Austin, and his interior works grace the walls of many Austin-area homes and businesses. But only a few years ago, he was an art teacher who thought his dream of painting fulltime was out of reach.

“Drawing and painting was always a passion of mine, so it seemed a natural fit for me to study art,” said Johnson, who taught K-8 art for 12 years. “But I never thought I’d be able to do it fulltime.”

In 2014, Johnston closed his classroom door for the last time and started living his dream. He and his wife, Erin, also a former art teacher, often paint together.

“We’re really grateful,” he said. “It’s hard to say if we could have this kind of life if we were in another city. The creative scene is really big here and Austin is definitely welcoming.”

Johnston recently completed two large murals in Viasat’s Austin office, which opened in 2017. The work so impressed company project managers they hired him to create two more in College Station. A new Viasat campus is nearing completion there.

“We’re excited, and really grateful to Viasat for choosing us and for choosing a local artist. To have repeat business from the same client is always a big compliment.” — Mike Johnston

Viasat’s development managers infuse local elements into each office they design. And Johnston, who loves space-themed art, was a perfect fit for the Austin office.

He’s also a known quantity in Austin. While people might not recognize his face, most know his work and the ‘Truth’ signature that accompanies it. When he first moved to Austin and was still teaching, Johnston painted murals on walls in a city-designated graffiti park and put posters of his work on Dumpsters and utility boxes. He chose the word truth because it reflects his faith in God, and is a strong, positive word. 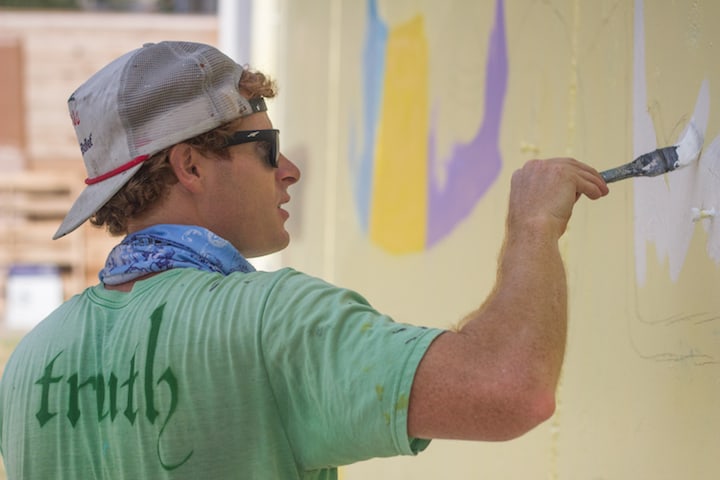 “I didn’t intend for it to be a marketing tool or my name, but it really worked out that way,” he said. “I thought of it as just a word that could encourage people if they saw it around town. And as it relates to art, there are things that come and go, but art is something that will always remain true and authentic.”

In Viasat’s Austin office, Johnston painted one mural in the shape of Texas with an astronaut and a guitar floating away from it; Austin is often called the Live

Music Capital of the World. The second, which covers a conference room wall, depicts an astronaut in space with graphic images that suggest a satellite and connectivity.

“We’re hoping to capture some of that culture along with Viasat’s culture in this new piece,” Johnston said.

The near-complete College Station campus is an 80,000-square-foot complex on 8.6 acres. It will house more than 200 Viasat employees. The team there focuses on Viasat’s managed Wi-Fi services.