At Viasat UK, the CTO is an army veteran eager to give back 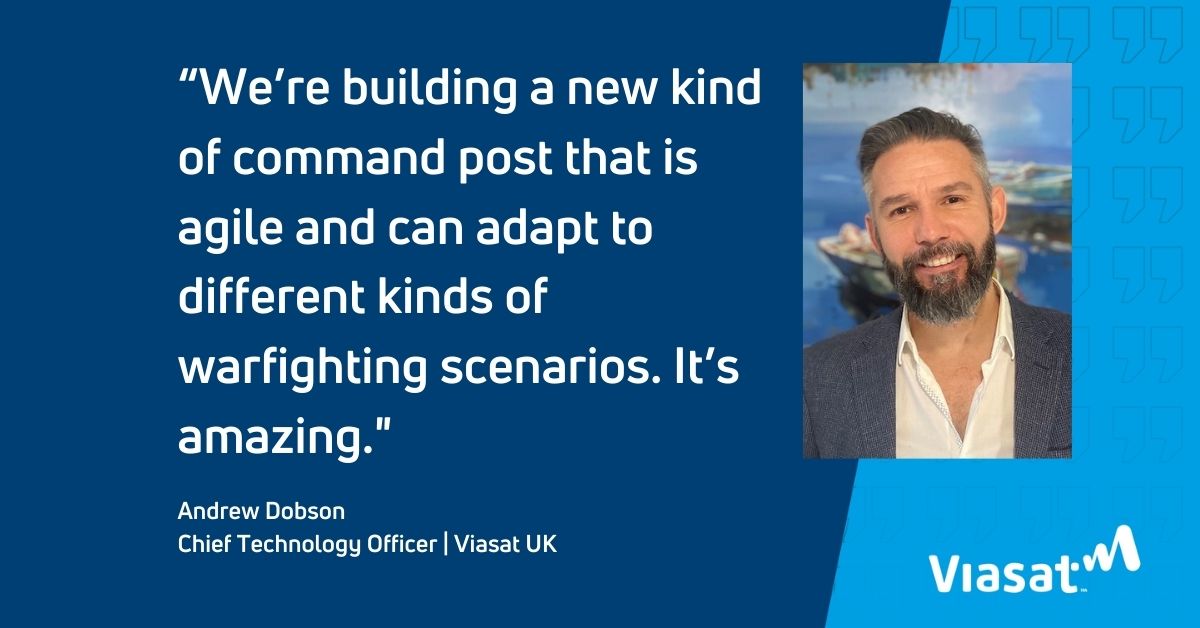 When Andrew Dobson was young, he envisioned a career in the arts. Instead, Viasat UK’s chief technology officer followed in his father’s footsteps and enlisted in Her Majesty’s Armed Forces.

“It wasn’t a natural fit,” he said. “I went from being this really creative person to being in the army, where I wasn’t allowed to be creative initially.”

But as his military career rapidly progressed, he found ways to incorporate creativity into his service.

“I think the reason why I succeeded where I did and was promoted faster than others was because of my creative nature, which started to reappear,” Dobson said. “I see things in a different, practical sense, and I really started to be able to express myself and my ideas as I moved through the ranks.”

Dobson brought that creative insight – along with his technical expertise and military experience – to Viasat last year. He joined the company in April 2020 as chief technology officer and more recently is now also the head of engineering for Viasat UK.

About half of Viasat’s UK team develops software and hardware for Viasat’s government encryption devices, supporting several NATO nations and enterprises. The other half are working on space and communications projects to support Europe’s growing space industry, and to prepare for expanded internet service from the company’s upcoming ViaSat-3 global constellation.

While Dobson’s rich military and private-sector defense experience made him a desired candidate for many high-profile jobs, he was sold on Viasat’s future technological plans.

“What made me join Viasat was the belief in UK Managing Director Steve Beeching and his vision,” Dobson said. “Steve spoke about ViaSat-3, the movement to space and how exciting the segment is going to be, the opportunities it’s going to open up within the UK and Europe. Those grand ambitions, and that Viasat is on a growth curve, investing in technology, interested me.”

Dobson spent his teen years in a mining village, joining the army at 19. He wasn’t immediately successful in the military, but a severe arm injury at 20 changed that trajectory. Rehabilitation was extensive, giving Dobson plenty of time to think about his future.

“I realized all the things I would lose and the parts I would miss – the camaraderie, the skills and how meaningful it was – and I decided to make a career in the army,” he said. “So I decided to work toward my degree, and every year get qualified in something new.”

Dobson started as a telecommunications engineer, conducting covert operations in electronic warfare in Northern Ireland. After several successive promotions at 27, he was promoted to staff sergeant, and at 31 – to warrant officer. Dobson was moving so quickly up the ranks, the army set up a new career structure to accommodate him and others who accelerated at a rapid pace.

After serving two tours in Afghanistan and at 33 earning the Queen’s Commission – a designation representing the Queen’s trust in an officer – Dobson became the head of innovation for UK Special Forces.

While his service in Afghanistan helped propel his career, it also had a profound emotional effect.

“Anyone who went to Afghanistan saw a hell of a lot,” he said. “I lost friends. It changed the way I think about people and the value of friends. It turned me into a conscious leader, a compassionate leader.”

Throughout his military career, Dobson never stopped learning. He earned degrees in telecommunications and system engineering, and a master’s in advanced networking.

Switch to the private sector

At 37, he left the military to work for Cisco as chief technology officer of UK National Security and Defence, later becoming director of technology development for the company’s global engineering team.

Dobson also spent some time working on Cisco’s Connected Conservation initiative. The project implemented technology to track rhinos without human interference, allowing the animals to remain wild. Like his time in Afghanistan, the experience was life-changing for Dobson.

“It was one of the best things I’ve ever done,” he said. “It’s one of those things that imprints on you. It gives you a wider view of what’s important in the world, and what our place is. It makes you understand there’s more to life than big business.”

After seven years at Cisco, he worked briefly as a consultant for the U.S.-based technology company CDW, helping set up its defense business.

At Viasat, Dobson quickly put his experience to work. He was instrumental in an October 2020 contract awarded for Viasat and CDW in support of a revolutionary deployed headquarters for NATO. The two companies will provide NATO’s Allied Rapid Reaction Corps with a next-gen command post, developing secure wireless military networks that will use enhanced battlefield command and control capabilities.

“We’re building a new kind of command post that is agile and can adapt to different kinds of warfighting scenarios,” Dobson said. “It’s amazing.

“I get emails about it every couple of weeks, mainly from military people wanting to know if we can do the same thing with them. It’s made a real impact, and it’s put Viasat on the map in that space.”

While Viasat is not yet widely known in the UK, Dobson predicted ViaSat-3 will change that.

“It’s going to give the governments a single global network so they can transmit around the globe on the same network, with a consistent level of assurance across all of it,” he said. “Not only that, they’ll receive bandwidth they’ve never had before.

“It means greater processing, real-time, higher definition video, faster, quicker analysis of information. And it will be secure – monitored and protected from any threats.”

As ingrained as he already is in Viasat’s work, Dobson said he looks forward to someday visiting Viasat’s California headquarters and meeting his coworkers face to face. Since his hiring, he’s been working from his home in Windsor near the Farnborough, UK office.

Meanwhile, he’s enjoying the latest evolution in his career, especially because it ties back to his military roots.

When he’s not busy at work, Dobson is busy spending time with his two daughters. He also said he loves the outdoors, fitness and travel.