Apache helicopter gets a valuable new communications tool from Viasat 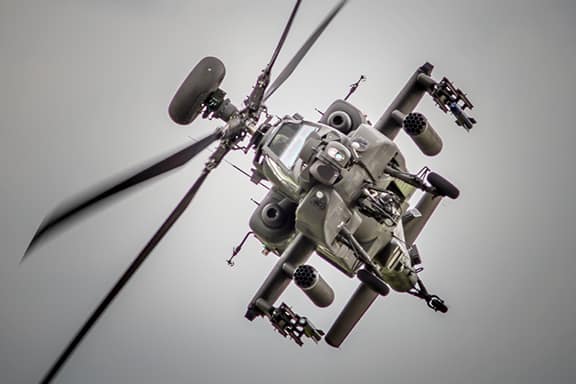 Looking to improve the communications capabilities of its Apache rotary wing aircraft, the U.S. Army recently chose Viasat’s Small Tactical Terminal (STT) KOR-24A as the air-to-ground communications solution. The upgrade will increase mission and operational effectiveness by giving the Apache a two-channel communications system for enhanced situational awareness, plus the ability to bridge communications between aircraft and, for the first time, ground maneuver forces.

The Apache is the world’s most advanced multi-role combat helicopter, used by both the U.S. Army and international defense forces around the world. The Apache platform is a model for continuous platform improvement and is now in its fifth generation, with hundreds of technological upgrades. Viasat’s STT represents one of the latest of these upgrades.

The STT brings real-time situational awareness, location, and command and control to the warfighter at the tactical network edge. In a single radio terminal, the edge user has access to both air and ground (friendly and enemy) situation data and can provide target data to the network in a secure and reliable manner.

The STT is the next generation of small form factor Link 16 terminals and will provide the Apache fleet simultaneous communications over two channels — communicating via both Link 16 and an additional channel which can be programed to a number of next-generation mobile ad-hoc network (MANET) waveforms. Because the STT has the capability to operate over two-channels, it allows the Apache to switch waveforms and network connections on the fly and merge disparate networks for a complete operational picture. The result is delivery of real-time situational awareness to the cockpit as the mission unfolds.

A minimum of 534 terminals will be delivered over the next four years to the U.S. Army and International Foreign Military Sales, including a recent order for the United Kingdom’s Apache helicopters.

Originally designed for large electronic warfare and command and control platforms and facilities, Link 16 provides the capability to communicate Precise Participant Location and Identification (PPLI) information as well as coordinate surveillance and command and control (C2) functions. The STT is one-third the size and weight of traditional data link radios, allowing it to be installed on a variety of platforms including rotorcraft, small boats, light aircraft, ground vehicles, and unmanned vehicles. The unit’s reduced size, weight, power and cost (SWaP-C)  greatly expands the number of platforms that can use the Link 16 network.

The Link 16 channel on Viasat’s STT allows the Apache, for the first time, to fuse the operational picture with fast-moving jets and ground forces simultaneously.

“Until the STT was integrated onboard the Apache, every mission was conducted without the real-time situational awareness provided by Link 16,” said Andy Kessler, business area director for Viasat’s Next Generation Tactical Datalink Systems. “Now when you’re looking down at your situational awareness display, every friendly, every threat — basically every piece of information — is displayed like a piece on a chess board.”

For air and ground interoperability, the STT extends the Link 16 network’s reach to more platforms and use cases. In addition to Link 16, the STT extends situational awareness even further by including either legacy VHF/UHF or a number of next-generation MANET waveforms. These MANET waveforms have the capability to transmit voice and data across long distances and disparate terrain and are used by individual soldiers, small units and small sensors to extend the network to the tactical edge.

The STT was selected by the Army based on its capability, product maturity, reliability, flexibility — plus its ability to provide real-time combat communications and interoperability to mission-specific networks. Based on extensive customer collaboration and a deep understanding of customer needs, the STT was developed at private expense to meet forecasted warfighter requirements as a non-developmental item (NDI). Developing the STT outside of the traditional acquisition cycle, Viasat was able to deliver this cutting edge capability significantly faster and with lower total lifecycle costs than traditional government programs of record. The success of the STT is further evidence of the long-term viability of Viasat’s commercial model for government use.

“It was important to invest and move out on our own,” Kessler said. “Our speed to market and technical expertise were key factors in developing the only certified two-channel Link 16 radio in the world.”

The STT brings real-time situational awareness, location, and command and control to the warfighter at the tactical network edge. In a single radio terminal, the edge user has access to both air and ground (friendly and enemy) situation data and can provide target data to the network in a secure and reliable manner.

A provider of Link 16 products for more than 20 years, Viasat remains the terminal provider of choice for rotary wing and other SWaP-constrained air and ground platforms by offering a variety of affordable Link 16 solutions to ensure warfighters have real-time, secure situational awareness whenever and wherever they need it.