In Georgia, the Viasat engineer followed her childhood love of making things work to a satisfying career 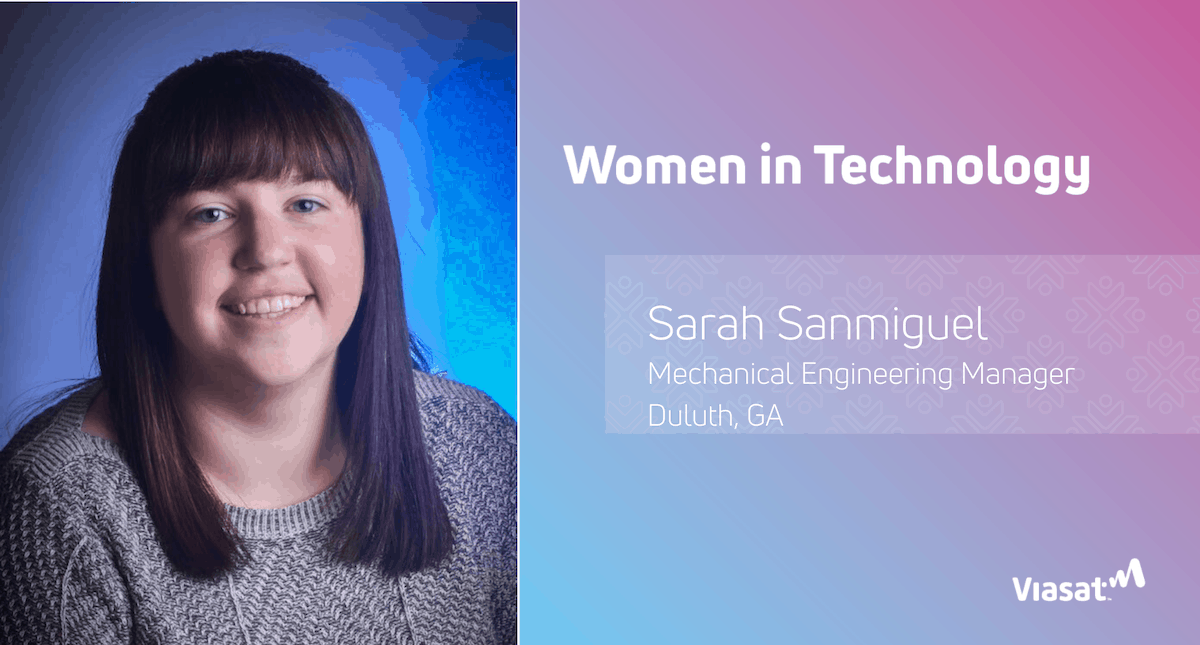 “When I was growing up, I wasn’t incredibly into dolls; I was excited by building and creating – things that were hands on,” said the 29-year-old, who works at Viasat’s Duluth, GA campus. “My younger brother would always get what I thought were the cool toys – Legos, K’NEX. All I wanted to do was help him assemble them and make them work.”

She was also exposed to engineering and technology through her father, Andrew Eccles, a 25-year Viasat employee who serves as a senior director of business development.

But like most kids, Sanmiguel says that to her, Viasat was simply the name of the place where her father worked –not one she pondered for a future career. That changed during her teen years when she talked with Viasat’s Director of Antenna Systems Technology Kristin Walsh, who holds a master’s in mechanical engineering.

“I was really enjoying math and science in high school but I wasn’t quite sure what I wanted to do. I considered paths like architecture and civil engineering, even electrical engineering,” Sanmiguel said. “Ultimately, it was an internship at Viasat and a conversation with Kristin Walsh that got me more focused and tuned into the idea of mechanical engineering. She opened up my eyes to the fact that the opportunities in that field are widespread, and the amount of applications are endless.”

Sanmiguel did two summer internships at Viasat, joining the company fulltime in 2012. In 2014, she completed her master’s degree in mechanical engineering at the Georgia Institute of Technology.

The internships and Walsh’s mentorship expanded Sanmiguel’s knowledge of the types of work Viasat is engaged in.

“What we’re doing here is absolutely incredible,” she said. “The kind of technology we’re creating and designing – it’s breaking existing technology barriers. And the fact that we’re extending high bandwidth Ka-band internet globally will have a significant impact on people and industry worldwide.”

But it’s about more than the technology.

“It’s the culture at Viasat that really does it for me,” she said. “We’ve got smart people willing to take chances on disruptive ideas. They challenge the status quo in creative ways. Colleagues reach out and support each other with questions and constructive feedback. The openness, the technology and innovation – it’s an amazing place to be.”

During her seven years at Viasat, Sanmiguel has grown into her career, changing roles and responsibilities. Currently, she’s mechanical engineering manager for the VAST Antenna Center of Excellence’s mechanical engineering group, and project engineer for the G-18 team. G-18 is an in-flight antenna typically used in government applications, including drones and other military aircraft.

Sanmiguel admits she had some early trepidation about managing others.

“When I first got offered the role, it was a little scary and exciting,” she said. “I’ve always enjoyed mentoring and working with people. So that part was a natural fit. But there were a lot of things I’ve had to learn over the past couple years. I’m still learning; I still run into situations that prompt me to seek out advice.”

She’s taken that love of mentoring even further. Sanmiguel is a member of Viasat Duluth’s newly founded chapter of Women in Tech, charged with community and educational outreach, where she’s planning Take Your Daughter to Work Day in June. She also sits on the Gwinnett Public County Schools’ STEM Advisory Board, a group that helps Gwinnett County industry partners develop and support school STEM programs.

When she’s not working or volunteering, Sanmiguel enjoys traveling and spending time with her husband. She is married to her college sweetheart, Bobby, whom she met as a freshman at Georgia Tech.

“I’m really happy with where I’m at,” Sanmiguel said. “From the people side, it’s really gratifying when I see my team grow and develop into stellar performers making a significant impact on our company’s future. From a technical perspective, I like that we’re influencing change in the industry, and we’re doing it in a disruptive way. And each day, you never know what you’re going to do when you come into the office. I like that bit of randomness.”

Sarah Sanmiguel sees a day when Viasat’s name will be as familiar to the general public as other tech giants.

“Once people realize how our future satellite constellation and antenna technology can effect change at a global scale, I think we will get to that point of recognition,” she said.

Meanwhile, she’s enjoying her part in the company’s success. Just how much was driven home during a recent winter holiday break.

“When there’s a long holiday like there was at Christmas, there’s a point where I get that itch to come back in and get into my routine,” she said, “when I know it’s time to start exercising my brain a little bit more.”