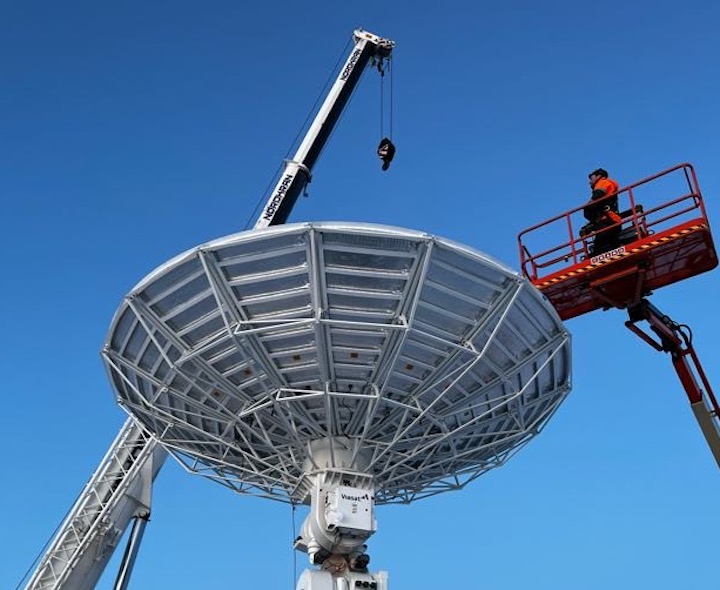 Viasat is adding its first high-latitude Real-Time Earth antenna in Sweden, providing a unique advantage for customers whose satellites need more frequent contact with an RTE facility. The new antenna is expected to go into service in late February.

Real-Time Earth is an expanding network of ground antennas aimed at serving satellite operators without their own ground stations. Viasat’s network allows for much faster downloads from more locations, which means operators get their data downloaded more quickly and with greater regularity.

The satellite at our newest RTE facility is tailormade to serve satellites operating in sun-synchronous orbits, passing over the same part of the Earth at roughly the same time each day. Satellites in these orbits can have up to nine contacts per day — each an opportunity to downlink and disseminate the data they’ve gathered — with the new RTE site.

The technology is ideal for Earth-observation satellites such as those used in environmental and weather monitoring, mapping, gathering military intelligence, and other uses.

“We’re supporting companies that provide imagery, like the type that would go into Google Maps,” Hawkins said. “We’re also supporting satellites that fly synthetic aperture radar sensors that can see at night and through the clouds. These can monitor anything from illegal fishing and piracy to ice movements — tracking shipping lanes to make sure they’re safe.

“Some of these customers are able to provide so much data they can detect change down to very minute detail,” he said. “It’s useful in the insurance industry, for example. After a flood, they’ll be able to immediately detect exactly which houses were affected. It’s also useful for monitoring climate change — for instance, detecting ice melting over time.”

Arctic Space Technologies is located in northern Sweden in the coastal town of Piteå, a site blessed with natural beauty as well as extremely calm weather. It’s also an area of the world in need of such technology.

“We saw there was a gap in the market here in Scandinavia, where basically no private commercial entities existed to provide this kind of service,” said company co-founder and COO Sandra Nilsson, a native of northern Sweden. “We’ve spent the last two or three years building the company and our customer base, getting our network established and working on our operations.”

“Together with Viasat, we will remove the carbon footprint from satellite data processing and align our operations with the European Green Deal,” he said. “Through the Real-Time Earth antenna system operated by Viasat and the data processing capabilities offered by Arctic Space, a Real Time Europe satellite data acquisition and processing system will be offered to satellite operators. This will allow them to acquire and process data much faster, more economically, and free of greenhouse gases.”

The high latitude, calm climate, and access to green-energy sources were also key to the company’s plans and success to date. In 2020, Arctic Space signed a partnership with EcoDataCenter. The ground station facility is connected directly to EcoDataCenter’s infrastructure with a dedicated, direct fiber connection. This enables extremely secure, reliable, and scalable network and data storage/processing solutions with a much lower carbon footprint than many other data centers. It also features bulletproof windows, cascaded security layers, redundant power systems, and dark fiber and wavelength systems.

“The latest numbers I read was that by 2040, data centers alone all over the world will emit 14% of the global emission,” Nilsson said. “Our data center partner is already reusing the excess heat and became the first climate positive data center in the world. I’m really proud Sweden can be in the forefront when it comes to sustainable power and green data centers.”

All those things together provided Viasat with an ideal solution.

“The timing was perfect,” Hawkins said. “We were looking for a polar site to expand our RTE network. Arctic Space offered an excellent location and an expert team that understands all the local regulations.”

He added that the co-location of the Viasat antenna with the data center opens up additional opportunities for our customers, such as highly scalable and sustainable private cloud, data storage, and processing solutions.

The company’s dedication to green energy and sustainable practices sweetened the deal further.

“That’s become more and more important around the world, but also to Viasat,” Hawkins said. “And it’s something they brought to the table that none of our other partners have. When you put together the geography, the people, the talent and the sustainability piece — it formed a really good match.”