After 31 years at Viasat, Phil Mar says hard work is still the secret to success 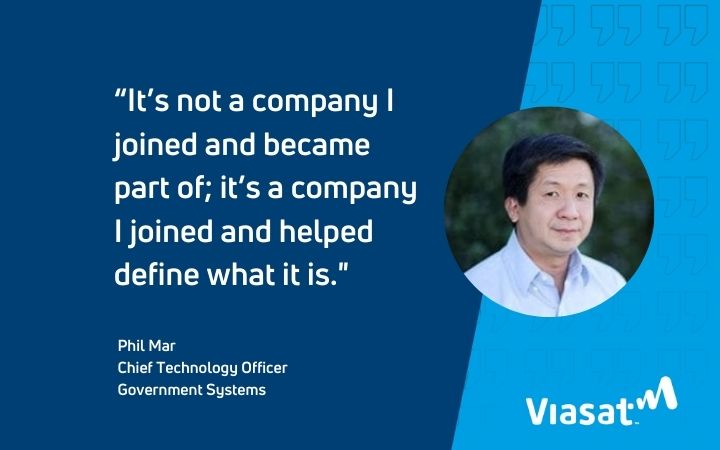 When Government Systems Chief Technical Officer Phil Mar joined Viasat in 1990, he was the company’s youngest employee. At the time, he didn’t expect to stay for more than a few years.

But Mar quickly fell in love with Viasat’s innovative culture. And over the next 31 years, he’s helped shape it.

Viasat was just 4 years old when Mar was hired, freshly graduated from the University of California San Diego with an electrical engineering degree.

Most of the other employees – including the three founders – had previously worked at San Diego telecommunications company Linkabit, and all had up to 10 years of work experience. Mar and other new grads were specifically chosen to bring new blood and fresh ideas to the company – and they quickly bonded.

“We played sports together; we worked late together; we hung around together,” Mar said. “At times we were working 20 hours a day. We worked hard and played hard, and that created a very energetic and young culture.”

“I didn’t want to be one of thousands. Being one of 25 seemed to be a good challenge,” he said. “I interviewed with all three founders, and I was impressed with them. They were open about the fact that there was a lot of uncertainty a new grad would have to deal with, where things are not absolutely structured. They were taking a chance with me, and I was taking a chance with them.”

In those early days, Mar said Viasat repeatedly competed against larger companies for government contracts and won. Those victories were intoxicating and bolstered his regard for the company.

“We slayed a lot of giants along the way, competing with people that had 20, 30 years in the industry,” he said. “We shared the teamwork and the glory of winning. It felt like you were part of something.”

Shortly after he was hired, Mar worked on a project to develop the first Advanced Data Controller – a packet processing system that provides error-free data transmission over noisy channels on satellite transmissions. While it began as a government contracted project, Viasat later branded the device as the Viasat Data Controller.

Mar’s role in the project was to research compression algorithms required to reduce the amount of data transmission in disadvantaged communications links.

“Back then, the company didn’t have internet or email; we didn’t even have a network printer,” he said. “I had to go back to the university library, research and make photocopies. I figured out what we had to use, how to make sure we weren’t violating anyone else’s patents, and how to implement that – all in a span of about four months.”

Mar also worked on the Enhanced Manpack UHF Terminal modem, a battery-operated UHF satellite radio built into a backpack for U.S. Army troops. Combined with a portable satellite antenna, the terminal can make a secure call almost anywhere in the world. To test the technology, Viasat negotiated for time on a U.S. government experimental satellite. The slot it received was from 2 to 4 a.m. Mar and others worked long hours to finish the testing.

“I would work until 11, go home and sleep for an hour and half, drive back to Viasat and start doing the testing,” Mar said. “Then I’d go home, sleep another two hours and go back to work.”

Once again, the hard work paid off. Viasat won more contracts, and with them, better testing slots. The work he and others did was foundational to the company’s success.

“The technology we were developing back then is the root of much of what we are still selling today.”

In the mid-’90s, Mar transitioned to Viasat’s commercial side to help turn the company in a new direction. CEO Mark Dankberg saw a different future for satellite technology.

“He had this vision that satellites should not be monopolized just by the government, but should be for everyone,” Mar said. “In 1995, I was drafted to a team to start the commercial arm of Viasat.”

Cellphones were still new at the time, and not yet in widespread use. Dankberg’s initial aim was to provide people in rural areas with access to a satellite voice service, and Mar played an instrumental role in that work.

He moved back to Government Systems in the early 2000s, working in secure communications, information assurance and cybersecurity – an area of technology that accelerated rapidly in the wake of 9/11. He has stayed there since, and was recently named CTO. Technologies he helps develop are instrumental to enable cloud computing in classified environments.

“Working for Viasat has allowed me to move around and do a lot of things, and I was constantly able to use what I’d done before to fuel the next thing I took on,” he said. “And it all prepared me to do this, where I’m able to have influence on a much larger scale, guiding people so they can do their jobs more effectively, and make the organization much more effective and profitable.”

In three decades with Viasat, Mar has seen the company repeatedly follow a now-familiar pattern, one that has cemented his confidence in its enduring success.

“We have had our ups and downs, but we’ve always been willing to change and evolve so that in the end, we are a better, more competitive company,” he said. “Our size is different than when I began. The business we’re in is different, and the structure is different. But deep down, Viasat still has the same culture – the drive for exploration, a fearlessness that allows people to speak their minds, a can-do attitude and the trust that people will do the right thing – and that is what makes us unique.”

When he’s not working, Mar enjoys spending time with his family, reading, traveling, and cooking. He’s also a thrill-seeker who likes riding the biggest, baddest rollercoasters he can find.