A breakthrough in rotary-wing communications 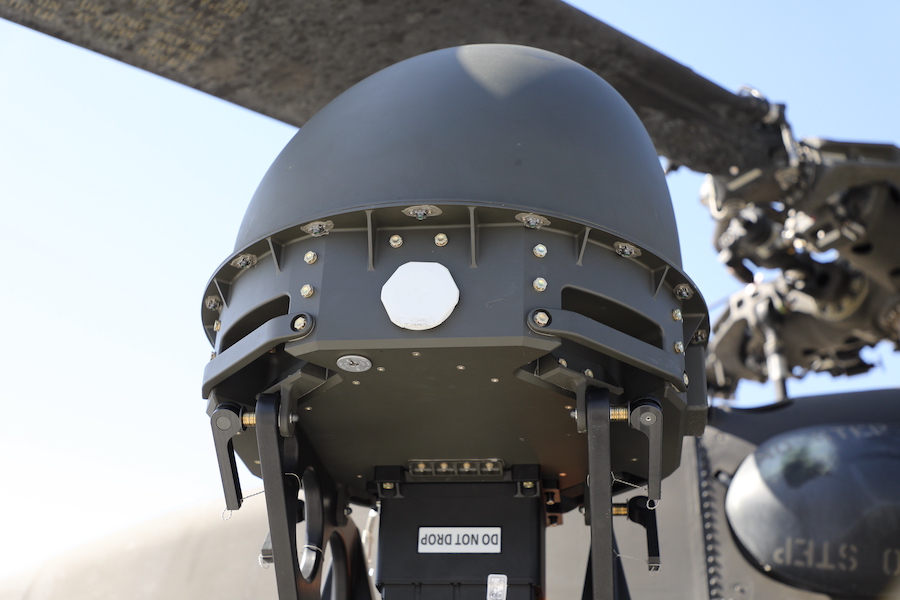 Viasat developed a unique waveform to allow satellite signals to pass through the rotating blades of a helicopter.

For years, rotary-wing aircraft have not been able to take advantage of high-speed, broadband satellite communications (SATCOM). The reason? Those whirling blades also distort radio signals, making it difficult for helicopters to use SATCOM while in flight.

For the U.S. military, this can mean the difference between life and death. For example, heliborne special operators dispatched to rescue an embassy under attack can’t receive the latest imagery from an ISR platform orbiting the target. Or, medics on a medical evacuation flight can’t exchange information on a wounded patient with doctors on the ground.

But Viasat has helped develop technology that enables rotary-wing aircraft to use SATCOM while in the air. Viasat, in partnership with engineering firm Strata-G Solutions, just successfully demonstrated beyond-line-of-sight (BLOS) satellite communications on a U.S. Army National Guard UH-60L helicopter.  Because helicopter-to-satellite signals travel upwards into space, they must pass through the blades, which causes errors every time a blade passes through the beam. To compensate for this, Viasat developed a waveform that corrects for these errors.

The May 6 demonstration, at Palomar-McClellan Airport in Carlsbad, CA, proved that rotary-wing aircraft can maintain through-the-blades connectivity while in flight. The UH-60L, equipped with Strata-G’s Rapid Aircraft Capability Convergence Kit (RACCK), was able to utilize Viasat’s Ka-band SATCOM terminal and high-capacity satellite service to connect with a simulated Viasat tactical operations center.

Viasat and Strata-G were responding to an urgent requirement by the Army’s Program Executive Office for Aviation for a demonstration to prove that rotary-wing SATCOM could be rapidly fielded.

“Currently, there is no broadband SATCOM capability on any U.S. military helicopter,” says Joe Johnson, business area director for rotary broadband services for Viasat Government Systems. “All that exists today is either UHF or L-band SATCOM, which lack the ability to deliver the enhanced situational awareness warfighters want to keep them safe.”

The RACCK system, in conjunction with Viasat’s broadband SATCOM system, can be installed within 30 minutes on any UH-60 with available external stores subsystem (ESSS) hardpoints. It can also operate with the Link 16 tactical data link system to extend datalink range by hundreds of miles. This enables SATCOM equipped helicopters to function as relay stations. For example, an AH-64 Apache attack helicopter can use its Common Data Link (CDL) to send data to a UH-60, which in turn can use SATCOM to relay data beyond line of sight, sending critical information to commanders thousands of miles from the action.

Choosing a UH-60L for this demonstration was not a coincidence. The Sikorsky UH-60 Black Hawk family of helicopters, with its numerous military and civilian variants, are a common sight around the world.

The fact that the Viasat/Strata-G solution works on a ubiquitous, legacy helicopter like the Black Hawk is a promising sign this system could be installed on other rotary-wing aircraft. That could be for other legacy models or even for future rotary platforms through the U.S. military’s Vertical Lift program.

“Rotary-wing platforms have been known to use slow, low-data-rate connectivity to communicate, which has inhibited mission capabilities,” says Craig Miller, President, Government Systems at Viasat. “In working with Strata-G, we were able to show how the U.S. Army could leverage roll-on/roll-off advanced broadband communications-on-the-move to enable critical warfighting functionality when it’s needed most on the tactical edge. This is a big step in transforming rotary-wing platform communications and enabling the powerful connectivity needed to support modern warfighters.”

But the implications of this technology extend far beyond military use. Those whirling helicopter blades have embedded themselves into the fabric of our society, including law enforcement, search and rescue, disaster relief, firefighting, construction, traffic reporting and commercial transportation. The ability to access high-capacity SATCOM — routinely, or even just on an emergency basis — has the potential to be highly useful.

“Our objective was to bring the same high performance, secure and reliable broadband connectivity to rotary-wing aircraft that we do today for fixed-wing aircraft,” Johnson says.