50 Years After Apollo 11: What the moon landing meant for the satellite industry 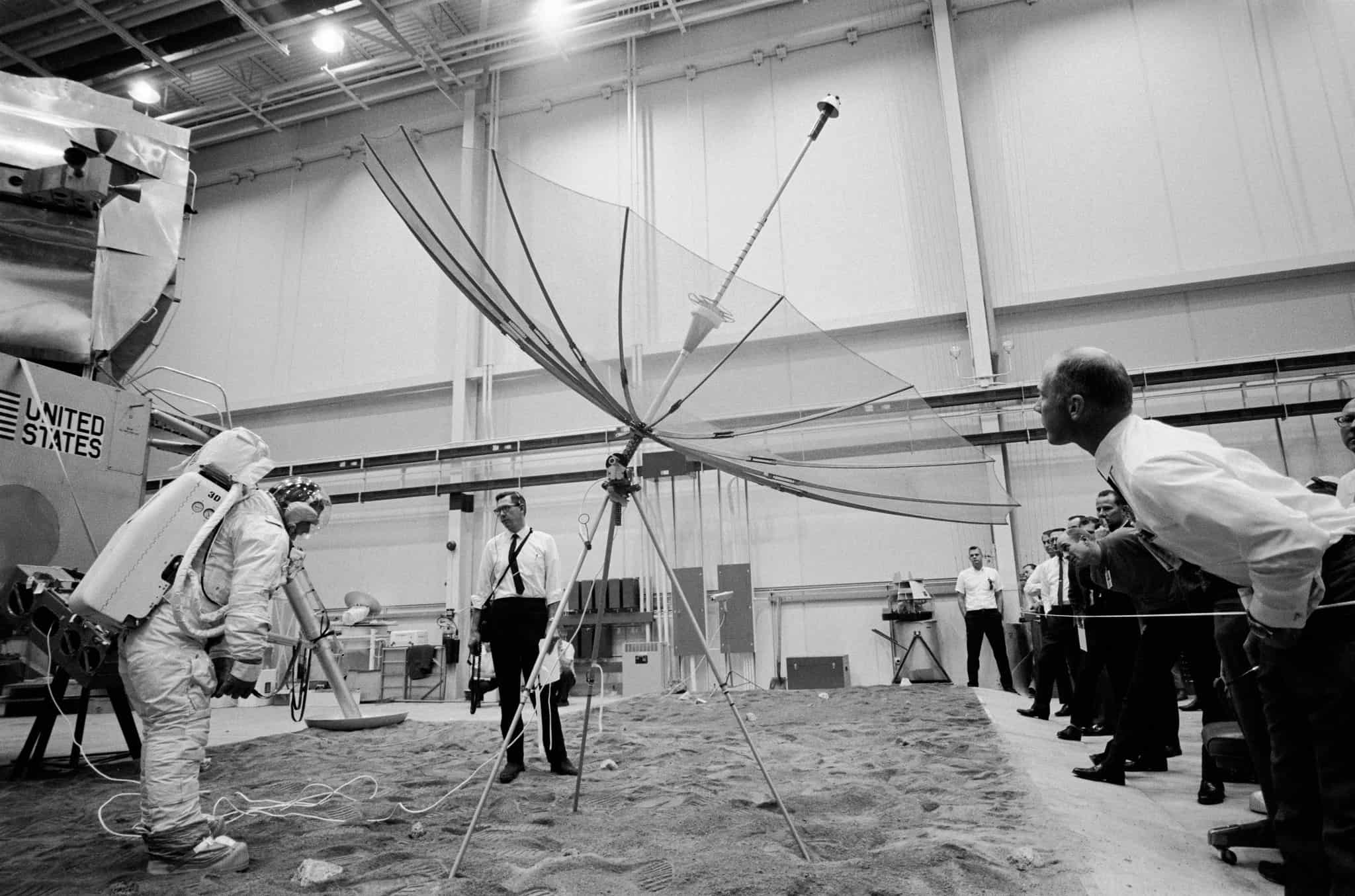 July 16 marks 50 years since America achieved the seemingly impossible and landed a man on the moon. The triumph came only eight years after President John F. Kennedy issued the famous moon-shot challenge: “I believe that this nation should commit itself to achieving the goal, before this decade is out, of landing a man on the moon and returning him safely to Earth.”

Things moved quickly after that. By the end of 1962, NASA’s Project Apollo was in place. By the end of the 1960s, the United States had completed two successful moon landings, and Kennedy Space Center had become the launch capital of the world.

This American venture into space began with a threat. The United States and the Soviet Union were competing to prove the superiority of their political systems, and they were using their technology and military to establish themselves as the greater power. So when the Soviets launched Sputnik-1 in 1957 — the first artificial satellite put in Earth’s orbit — Americans were taken aback. The country considered Sputnik a national security issue, because it potentially signaled the Soviet Union’s ability to send a nuclear warhead into U.S. air space. 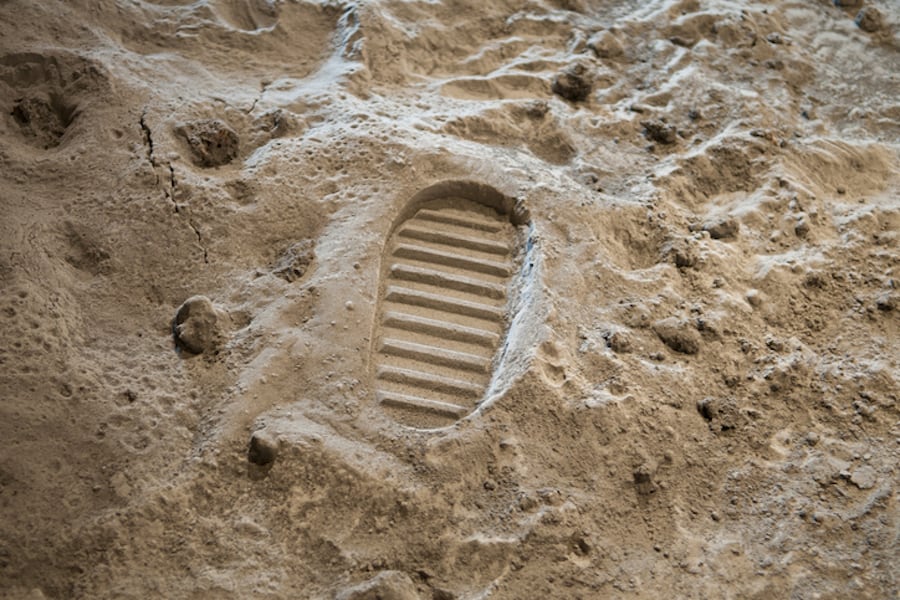 Footprint on the Moon surface

The path to Apollo 11

But Sputnik-1 was only a beach-ball sized satellite with limited capabilities. If the goal was to one-up the USSR, the U.S. did it by landing the first man on the moon just 12 years later.

It wasn’t easy, but Sputnik lit a fire under the country. U.S. President Eisenhower created NASA in 1958, and less than a month later the agency launched Project Mercury, the United States’ first series of flights aimed at putting a human in space. From 1961 to 1964, NASA’s budget increased almost 500%.

And the cost of space exploration wasn’t only in dollars. Two years before Neil Armstrong’s landing, three astronauts were killed in a fire during a launch simulation.

Nonetheless, on July 20, 1969, Armstrong made the “giant leap for mankind.” By contrast, in the three years after Apollo 11’s landing, the Soviet Union failed to launch a lunar landing craft four times. The accomplishment excited youngsters everywhere, including Dave Ryan, President of Viasat's Space and Commercial Networks division.

“I was glued to the TV set watching it all happen,” Ryan said. “It got me into this business.”

The moon landing was not only a point of pride for Americans, it was also a major benefit to peoples’ standard of living. Incredible technologies were invented or enhanced in the process of trying to send a man to the moon. In fact, the Apollo project inspired many of the technologies we use today. To make space travel feasible, for example, scientists had to make computers smaller and faster, which contributed to the development of the personal computer.

A giant leap for satellite

Apollo 11 was a massive catalyst for the advancement of satellite technology as well. Ryan said the event spurred a generation of people into thinking about exploration, science and communication in space— and as a result, satellite development took off.

“At first, it was so expensive and exotic to send something to space, that it seemed like the government was the only place you could go to that would have the means to do it,” Ryan said. “Building a rocket that puts out almost 8 million pounds of thrust and was 360 feet tall is not anything anybody dreamed you could do with a private company. But it did start spawning ideas about smaller things in space, and by the 1970s it became even more popular and more financially feasible to have private industry do it.” 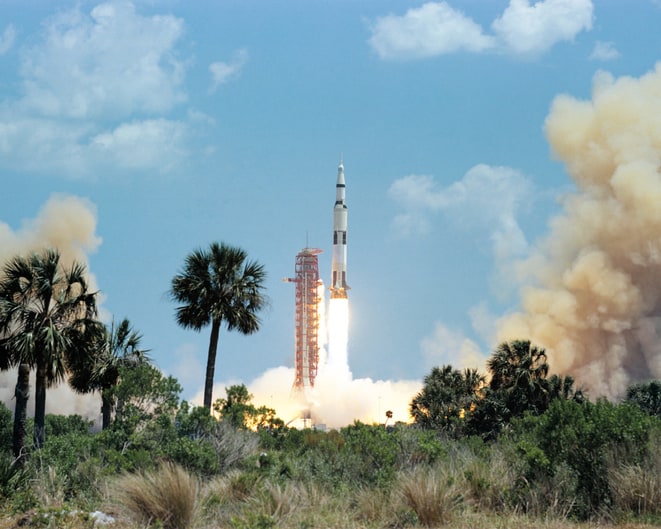 Today, the aerospace sector is not as government-driven as it was in the latter half of the 20th century. The shift toward the private sector resulted from the evolution of technology, Ryan said. As more communication satellites were launched, the industry became capable of funding its own technology. The cellular revolution also transformed microelectronic technology, which helped make communications satellites more economical, smaller, and powerful.

“Now it’s to the point where the commercial industry is putting many more times the amount of research and development funds into space than the government does,” Ryan said.

The shift is symbolic of how commercial industry will lead the way on next-generation technologies, he added.

“It’s especially relevant to companies like Viasat,” he said. “We have more capacity in our satellites than anybody’s dreamed of, and we’re going to continue to do that. Being able to provide that kind of bandwidth cheaply and anywhere in the world now opens up more possibilities, similar to the opportunities the cellphone revolution has been able to provide.”

Ryan has some optimistic predictions on what future human involvement in space will look like as well. He pictures more education on fundamental astrophysics, the study of the universe’s origins and how it has evolved. In the near future, he anticipates a completion of the James Webb telescope, the Hubble Space Telescope’s successor, designed to give humans a window to the formation of the first stars. Ryan even envisions manned expeditions to Mars within our lifetime, which is not out of line with some countries’ goals in space.

“We certainly have the technology to do it,” Ryan said. “The question is, do we have the will?”

Celebrations commemorating Apollo 11’s 50th anniversary are underway, according to NASA. Museums across the country have already opened movie screenings, presentations and exhibitions dedicated to the project, such as the interactive “Be the Astronaut / Apollo 50th” exhibit, which is NASA-verified and features the history of lunar exploration and future Moon missions. Aerospace facilities have also come up with a variety of creative ways to celebrate the occasion. The US Space and Rocket Center in Alabama is offering daily live reenactments of the lunar landing, and has held a panel about the engineers and managers who were crucial to the Saturn rocket, developed to support the Apollo program and launch the Skylab space station. Huntsville, Alabama’s Space Camp has encouraged people around the world to sign up and learn how to build a model rocket, as a part of their Global Rocket Launch. The event is intended to be a countdown to the day Apollo 11 was launched, and everyone who has signed up is invited on July 16 to launch the rocket they’ve built. Apollopalooza 2019, a week-long space festival, runs through July 20 at Denver’s Wings Over the Rockies Air & Space Museum. The celebration is expected to feature a former Apollo astronaut, STEM activities, leading aerospace companies, and Apollo-themed exhibits. For more information on the moon landing celebrations, check out NASA, The New York Times, and Space.com. For a historical timeline of the 1960s, when the Apollo project was most active, see NASA’s page.

The Soviet Union launches Sputnik 1, the world’s first artificial satellite.  The U.S. launches its first satellite, Explorer 1.  President Dwight D. Eisenhower creates the National Aeronautics and Space Administration (NASA) Project Mercury, the U.S.’s first program to put a man in space, is officially approved. The Soviet Union’s Luna 2 becomes the first space probe to reach the Moon.  Soviet cosmonaut Yuri Gagarin becomes the first person to orbit Earth.  May President John F. Kennedy urges the nation to land a man on the moon by the end of the decade. Later that year, NASA starts the Apollo program, which is dedicated to scientific exploration on the moon On the third Mercury flight, John Glenn becomes the first American to orbit Earth. The first Apollo crew dies from a flash fire during a simulation. The mission they had been training for is named Apollo 1. Frank Borman, Jim Lovell and Bill Anders successfully orbit the Moon on Apollo 8. Neil Armstrong is the first person to set foot on the Moon. An estimated 530 million people are watching the event. April 11Apollo 13 is a “successful failure”; the crew fails to reach the moon but is able to make it home safely despite an explosion that damaged their ship.  During the Apollo 15 mission, astronauts are able to drive a lunar rover on the Moon’s surface. Apollo 17 is the last Apollo mission, and the last manned moon landing. The first scientist-astronaut was on board, and the crew stayed on the Moon for three days.